The Prodigal — coming soon to DVD! 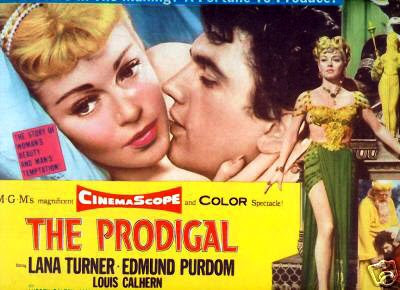 Many movies have been made about Jesus and his followers over the years. But I can think of only one Hollywood film that was based on one of his parables … and that film is Richard Thorpe’s The Prodigal (1955), which starred Edmund Purdom as a young Hebrew named Micah and Lana Turner as Samarra, a character described by Turner herself as “the high priestess of Astarte, goddess of the flesh.” I have never actually seen this film, nor has it ever been released on DVD … but now comes word that Warner Home Video is releasing the film on June 26 in a boxed set called Cult Camp Classics 4: Historical Epics. The other films in the set are Sergio Leone’s The Colossus of Rhodes (1961) and Howard Hawks’s Land of the Pharaohs (1955), which was one of the first films ever to star Joan Collins. (Hat tip to Lou Lumenick.)

March 22, 2007 Yet another movie not screened for critics.
Recent Comments
2 Comments | Leave a Comment
"I have neither noticed that much. I recenty read a leadership book inspired from Cyrus ..."
Hamid Mortazavi Cyrus the Great — a Persian ..."
""AD" stands for "Anno Domini", a Latin expression meaning "In the Year of Our Lord".So ..."
Peter T Chattaway The Chosen — season one, episode ..."
"Why does it say at the start of episode 3 that it takes place 26 ..."
Desiree Chamberlain The Chosen — season one, episode ..."
"What about Hellboy, The Grudge, Ghoulies, and Anaconda?"
45th Spiderbob Group VGCP When R-rated franchises go PG-13 …
Browse Our Archives
get the latest updates from
FilmChat
and the Patheos
Entertainment
Channel
POPULAR AT PATHEOS Entertainment
1