Music and costumes in End of the Spear

Music and costumes in End of the Spear April 30, 2007 Peter T. Chattaway

Many thanks to the folks at Fox Faith for sending me review copies of Beyond the Gates of Splendor (2002) and End of the Spear (2005), two films that I had heard much about but had never had the chance to see before. The former film is a documentary about five American missionaries who were killed by Ecuadorian natives in 1956, and how both sides of that incident came to be reconciled in the end, while the latter film is a dramatization of that story.

Both films are quite good, and indeed quite moving, in their own respective ways — even if they inevitably leave out some of the more complex, and indeed difficult, aspects of the real-life story. (See Kathryn Long’s article at Books & Culture for more on that.)

But what leapt out at me, after seeing the two films back-to-back, were some of the aesthetic differences between the documentary and the dramatization — a contrast that was made all the more striking by the fact that both films were made by some of the same key creative personnel, including writer-director Jim Hanon.

Visually, of course, there is the fact that the actors tend to look more attractive than the real-life people they are playing — nothing new about that — and the natives have been “dressed up” to avoid the sort of nudity that might attract an R rating.

Consider a pivotal moment in both films, when three natives — a man and two women — step out of the jungle and meet the five missionaries on the banks of a river. Here is how the actual women looked, in the home-movie footage shot by the missionaries: 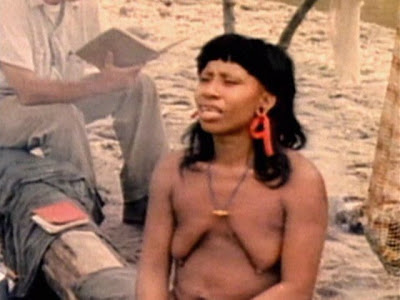 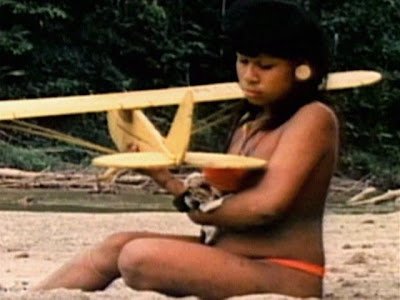 And here is how they look in End of the Spear:

Now End of the Spear is hardly the only film to do this, of course — at the press junket for Terrence Malick’s The New World (2005), producer Sarah Green said the Native Americans in their movie dressed much more modestly than their real-life counterparts because the filmmakers wanted “everyone” to be able to see their movie. Still, you have to wonder, have standards really changed so much since The Mission (1986) and the indigenous Latin American nudity therein got nothing worse than a PG rating?

The other interesting aesthetic difference lies in the area of music. According to the end credits, these are the five songs that appear in the documentary, Beyond the Gates of Splendor:

And these are the three songs that appear in the dramatic film, End of the Spear:

So for some reason, the documentary uses secular rock’n’roll to evoke first the era when these five missionaries went to their deaths in Ecuador, and then the era when one of their sons returned to the place where his father had died; but the dramatic film uses an earlier generation’s jazz music and an even earlier era’s opera to evoke the, um, 1950s, and then the dramatic film plays a standard-issue CCM ballad over the closing credits.

Like I say, this is a remarkable difference, especially because both films were made by essentially the same people. Which of these musical choices reflects the tastes of the actual missionaries themselves? What do these choices say about how the filmmakers perceive their intended audiences? Is there something about the stylization of a dramatic film that required the filmmakers to choose “safer” or “classier” music? Did the missionaries ever listen to the secular rock’n’roll that we hear in the documentary, or was it put there just because it seemed to fit with the footage from that era? Is it possible the documentary was intended for a “secular” audience that might not have known the story while the dramatic film was intended primarily as “Christian” entertainment?

I’m not sure how to explain this curious discrepancy, but I’d be interested in hearing any theories that people might have.

May 1, 2007 Bart Simpson and Tarzan, as nature made them
Recent Comments
2 Comments | Leave a Comment
Browse Our Archives
get the latest from
FilmChat
Sign up for our newsletter
POPULAR AT PATHEOS Entertainment
1