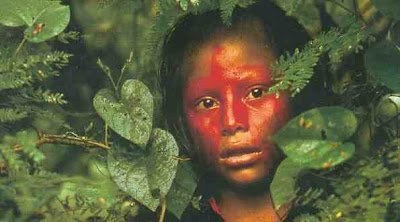 I know some people who dismiss or outright loathe Ron Fricke’s Baraka (1992) because they think it is a mere “knock-off” of Godfrey Reggio’s Koyaanisqatsi (1983), which Fricke shot. (I will never forget the local critic who told me after a screening of Reggio’s Naqoyqatsi that he found Baraka “vomitous”.) But I also know people who like Baraka better because its soundtrack uses tribal chants and the likes of Dead Can Dance rather than the music of Philip Glass, which apparently has its detractors. Personally, I am a bigger fan of Koyaanisqatsi than of most films — it’s in my all-time top four — but I think Baraka is different enough to be interesting in its own way. So I was intrigued to read in Variety today that Fricke has begun shooting a “sequel” to Baraka, called Samsara. Fricke’s quasi-documentary is, of course, not to be confused with Pan Nalin’s Samsara (2001), which was a dramatic film about a Buddhist monk, or with any of several other films.

May 18, 2007 random Bible movie connection of the day
Recent Comments
0 | Leave a Comment
Browse Our Archives
get the latest updates from
FilmChat
and the Patheos
Entertainment
Channel
POPULAR AT PATHEOS Entertainment
1