The Ten Commandments — the animated film

The Ten Commandments — the animated film May 26, 2007 Peter T. Chattaway 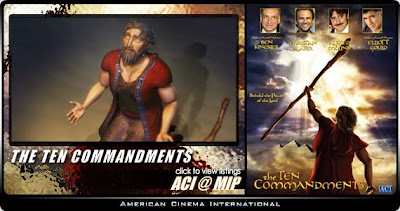 Two months ago, I made an extremely brief reference to an upcoming CGI cartoon by the name of The Ten Commandments.

Tonight, I discovered that if you click here, you can see a promo featuring several of the filmmakers, including Christian Slater (who plays Moses), Alfred Molina (who plays the Pharaoh Ramses), Elliott Gould (who plays God) and Ben Kingsley (who played Moses himself in a 1995 TV-movie produced as part of “the Bible Collection“, but merely narrates this newest version).

I haven’t a clue what to expect from this film, though I note that Slater says it will go further than The Prince of Egypt (1998), which pretty much came to an end at the crossing of the Red Sea. It seems the new film will get at least as far as God telling the Hebrews that they must wander in the wilderness for 40 years.

This is at least the third project to bear this name in recent years. Of course, the name is most commonly associated with the films that Cecil B. DeMille directed in 1923 and in 1956. But last year alone, we also saw a TV mini-series and the DVD release of a stage musical starring The Prince of Egypt‘s Val Kilmer.

If the new cartoon sounds like a remake, that may not be entirely accidental; one of its two directors, John Stronach, was also a producer on the animated version of Ben Hur (2003) that featured Charlton Heston‘s voice a few years back. And Heston, of course, played Moses in the 1956 version of The Ten Commandments.

And speaking of actors, I can’t help recalling that Slater and Kilmer co-starred in Renny Harlin’s Mindhunters (2004; my review).

Anyway, the new film opens in September in “over 600 theatres”. Time will tell if any of those theatres are in Canada.

May 26, 2007
Nollywood produces its own Amazing Grace!
Next Post

May 27, 2007 The Toronto Star previews Not the Messiah
Recent Comments
0 | Leave a Comment
"I have neither noticed that much. I recenty read a leadership book inspired from Cyrus ..."
Hamid Mortazavi Cyrus the Great — a Persian ..."
""AD" stands for "Anno Domini", a Latin expression meaning "In the Year of Our Lord".So ..."
Peter T Chattaway The Chosen — season one, episode ..."
"Why does it say at the start of episode 3 that it takes place 26 ..."
Desiree Chamberlain The Chosen — season one, episode ..."
"What about Hellboy, The Grudge, Ghoulies, and Anaconda?"
45th Spiderbob Group VGCP When R-rated franchises go PG-13 …
Browse Our Archives
get the latest updates from
FilmChat
and the Patheos
Entertainment
Channel
POPULAR AT PATHEOS Entertainment
1