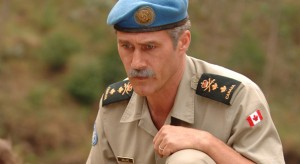 AT LEAST one new movie about the Rwandan genocide has been produced each year for the past four years, ever since Terry George directed Don Cheadle and Sophie Okonedo to their richly deserved Oscar nominations for Hotel Rwanda — and to the casual viewer, it might seem like all these films are beginning to blur together.

All of these films — including Shooting Dogs (released in the United States as Beyond the Gates), A Sunday in Kigali and the newest film, Shake Hands with the Devil — have depicted the shock and horror felt by whites and blacks alike when Hutu extremists began killing Tutsis by the tens of thousands in April 1994.

And most of these films have shown how the people who committed these atrocities guessed correctly that the United Nations would offer no serious intervention, despite having a team on the ground. As more than one film has pointed out, if the United States pulled out of Somalia the year before after suffering only 18 casualties, why would they or anyone else risk their troops for some obscure corner of Africa?

These points and others have been made in several films already, but Shake Hands with the Devil comes at them from a perspective we haven’t quite seen before, because it is based on the award-winning memoir by Lt. Gen. Roméo Dallaire, the Canadian officer who led the UN’s peacekeepers during the genocide.

Shake Hands with the Devil, on the other hand, puts those characters on-screen, and makes their deaths matter just that little bit more. Dallaire (played by Roy Dupuis), as leader of the UN peacekeepers, knows and meets with all the key political and military figures in Rwanda, including the president, before the genocide starts. And as the general responsible for the troops, it is his sad duty to count the bodies of his men — after they have been piled up, rather heartlessly, behind a morgue.

The new film also places arguably greater emphasis on the frustration felt by Dallaire and his comrades. While some of the other films have focused on real or fictitious civilians who strive heroically to save lives any way they can, the new film concerns a military officer who is bound by the rules of engagement that are faxed to him from another continent. He has no freedom to improvise, to think outside the box.

The film — written by Michael Donovan, who co-produced Bowling for Columbine — shows how Dallaire was prepared to launch raids against Hutu extremists before the genocide had even begun, and how he demanded that the United Nations send in reinforcements after it started. Every time, though, he is thwarted by politicians and bureaucrats who barely give him and his men the means to defend themselves.

Surprisingly, the film makes only the briefest of nods to religious themes. One scene depicts the bodies of those who were killed inside a church, and Dallaire recalls in another scene how he was brought up to believe that “despair is the sin that cannot be forgiven.” As he descends into a suicidal depression, he remarks, “When you’re guilty, you can do penance, atone for your sins. But when you fail, it’s done.”

Earlier versions of this story have been more explicit about the religious aspects of the Rwandan massacre, for better and for worse. On the cover of his book, Dallaire boldly states that he has met the Devil, and therefore, he knows there is a God; while a 2004 documentary based on the book criticized Rwandan churches for not doing more to prevent the genocide. (Dallaire himself notes in the book that some of the killers were celebrating Easter only a few days before the killing began.)

The film, directed in competent but unremarkable fashion by Roger Spottiswoode, is told in flashbacks, as Dallaire sits in a psychiatrist’s office and is haunted by faces from his past — some of which try to reassure him that he did what he could. But the ultimate focus is not on Dallaire the man, as much as it is on the impossible situation in which he found himself. Shake Hands with the Devil may or may not last long at the multiplex, but it will probably live on in history classes for years to come.

September 25, 2007
Movie to explore "missing years" of Jesus
Next Post

September 27, 2007 VIFF 2007 -- movie-going schedule
Recent Comments
0 | Leave a Comment
"Whoever wrote this article called Mary a virgin. She was only a virgin till after ..."
Ronnette Harvey The latest attempt to film all ..."
"In addition to this explanation of why "Paul says he can’t tell the Roman Christians ..."
PaulDT Paul, Apostle of Christ: a scene ..."
"Outstanding outline and identification of references and sources as well as background. Thank you so ..."
PaulDT Paul, Apostle of Christ: a scene ..."
"" So now, basically, the Magi are just a substitute for Santa Claus." <- Well... ..."
The 3 Wise Men — not ..."
Browse Our Archives
Follow Us!