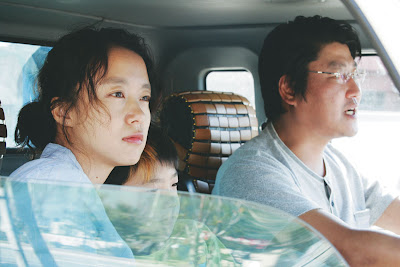 One of the more interesting films playing at this year’s Vancouver International Film Festival — certainly from a faith perspective — is Miryang AKA Secret Sunshine, which won the Best Actress award in Cannes for Jeon Do-yeon and was recently picked to be South Korea’s official submission for the Oscar for Best Foreign Language Film. In my all-too-brief capsule review, I wrote:

It concerns a widow who moves with her son to her husband’s hometown. When tragedy strikes, she turns to a local church for solace – but then gets angry at God for forgiving the person who wronged her. There are moments in this film that could have played to certain stereotypes about pious Christians, by making them look superficial or hypocritical; but to the filmmakers’ credit, their story is a little more complicated than that.

I happened to write that without knowing anything about director Lee Chang-dong or the response to this film within South Korea, which I know has a strong evangelical Christian population. So I am happy to say that today’s New York Times devotes an entire article to this film and its director. A couple of excerpts:

As “Secret Sunshine” begins, Shin-ae (Ms. Jeon), a young widow from Seoul, is moving with her little boy to her late husband’s hometown, a provincial city called Miryang. (The literal translation provides the English title.) Under the disapproving scrutiny of the gossipy locals, she sets up a piano school and finds a puppyish admirer in a friendly mechanic (the popular actor Song Kang-ho, last seen here in “The Host”). Before long a blindsiding tragedy sends the protagonist — and the film — spinning into an altogether different orbit. As Shin-ae agonizes over the meaning of suffering and the mystery of salvation, the movie evolves into a provocative study of madness and belief.

“One of the most important things to me was to find a way to portray things that are not visible to the naked eye, faith being one of them,” Mr. Lee said, speaking via a translator in Toronto this month. . . .

“Secret Sunshine,” perhaps Mr. Lee’s most unflinching film, acknowledges its heroine’s need for spiritual succor even as it takes a coolly skeptical look at the role of evangelical Christianity in Korean society. “Christians are quite a powerful group in South Korea, and people on the production team were worried about what the reception would be,” Mr. Lee said. When the film opened in South Korea in May, he added, “some people were critical, but there was also positive feedback. Some pastors were recommending the film to their church members.”

According to Sung-Deuk Oak, an assistant professor of Korean Christianity at the University of California, Los Angeles, about a third of South Koreans are Christian and the majority of South Korean Christians are conservative, evangelical Protestants. Mr. Oak said that “Secret Sunshine” was a hot topic of conversation in churches and the news media in South Korea this year.

Still, Mr. Oak added, Mr. Lee’s film raises “heavy theological questions” and is nowhere near as condescending or stereotypical in its portrayal of the devout as “Lady Vengeance,” the concluding installment in Mr. Park’s revenge trilogy. The film also deals with forgiveness and redemption, albeit in a very different way.

Mr. Lee said he had been careful not to exaggerate or caricature Christian rites. “In terms of the services and prayer meetings, it was very realistic, more or less a documentary approach,” he said. “If people feel uncomfortable or find some elements of it a little ridiculous, they might be admitting there’s a problem with the way Christianity is practiced in Korea.”

A good part of the film’s power derives from the range and intensity of Ms. Jeon’s performance. Mr. Lee has a reputation for demanding many takes. “I am notorious for giving actors a hard time,” he said with a smile. “I believe that acting should not be about actions, but reactions.” By the end of the shoot, he said, his lead actress “was starting to hate me.” But, he added, “Maybe that helped her since her character really hates her God at the end of the movie.”

Asked about his own religious beliefs, Mr. Lee quoted Ludwig Wittgenstein — “Whereof one cannot speak, thereof one must be silent” — and added, “That’s my position on God and faith.”

“Secret Sunshine” ends on a note at once ambiguous and hopeful. Its limpid, humble approach to suffering and grace suggests something like “Breaking the Waves” stripped of mysticism, or a rationalist version of “The Pilgrim’s Progress.”

“Shin-ae is always looking up and never at the ground,” Mr. Lee said, pointing out a recurring motif. The film opens with a wide shot of the sky and concludes with the camera trained on a patch of earth. “I wanted to show that the meaning of life is not far from where we are,” he said. “It’s not up there. It’s here, in our actual life.”

There are currently two more screenings scheduled for this year’s festival — one late tonight and one tomorrow afternoon. If you happen to be in Vancouver right now, it’s definitely worth seeing.

OCT 2 UPDATE: Victor Morton at the Rightwing Film Geek blog has linked to this post and responded to a comment I made elsewhere about a pivotal scene. Just to clarify, I really like the way this film raises the question of whether we can ever accept the fact that God has forgiven the people who wronged us. As Morton puts it:

It is a true test of sainthood: can we be happy for the forgiveness received by those who have wronged us? To take it to the logical end: do we *want* Hitler to be in Hell. It’s hard to say “no” to that, but Christians must. The breadth and depth of God’s forgiveness is not a particularly interesting theological question; the answer is cut-and-dried obvious: “we must be happy for the killer” (and must not want Hitler in Hell). But it’s much more interesting as an existential dilemma: “can we be,” or “can she be.” In fact, the existential questions make for far more interesting drama . . .

One of this film’s more intriguing elements is the way it touches on the notion that forgiveness can be something of a power game. (Warning: there be spoilers here.) The woman in this film wants to visit the man who wronged her so that she can forgive him, and we have every reason to believe that she is devout and sincere in doing so; yet she does it not just because it is the right thing to do but also, I suspect, because it helps her to put the pieces back together, to imagine herself in a position of power over the man. So when the man reveals that he has already been forgiven by God — and, what’s more, has been praying for the woman — it is not at all hard to see how the woman might feel that the man has taken the power away from her and asserted it over her again.

The problem I have with this scene — after one viewing, anyway — is that a man who had truly repented of such a heinous crime would probably not be as calm and “in control”, in more than one sense of the term, in a situation like that. And if he was, I would not expect other Christians to back him up. Though if such a scene ever did play out in real life the way it does here, I would fully understand why the woman reacts to it the way she does.

September 30, 2007 Noah's Ark... the cartoon... again... so soon...
Recent Comments
0 | Leave a Comment
"I have neither noticed that much. I recenty read a leadership book inspired from Cyrus ..."
Hamid Mortazavi Cyrus the Great — a Persian ..."
""AD" stands for "Anno Domini", a Latin expression meaning "In the Year of Our Lord".So ..."
Peter T Chattaway The Chosen — season one, episode ..."
"Why does it say at the start of episode 3 that it takes place 26 ..."
Desiree Chamberlain The Chosen — season one, episode ..."
"What about Hellboy, The Grudge, Ghoulies, and Anaconda?"
45th Spiderbob Group VGCP When R-rated franchises go PG-13 …
Browse Our Archives
get the latest updates from
FilmChat
and the Patheos
Entertainment
Channel
POPULAR AT PATHEOS Entertainment
1