And now yet another Noah’s Ark cartoon!? 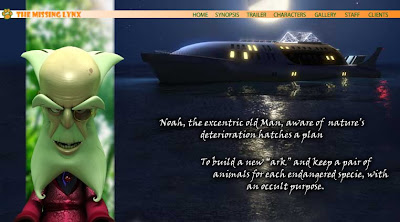 The still-unnamed company aims to make five animated features over the next 10 years.

The 50-50 joint venture kicks off with a pic already in production, “The Missing Lynx,” which is directed by Kandor partners Manuel Sicilia and Raul Garcia, a former animator for Pixar, Disney and DreamWorks. . . .

Pic turns on a gaggle of animals escaping from a mad millionaire’s new Noah’s Ark. . . .

Sounds a bit like a cross between Evan Almighty and Madagascar — except for the bit about the millionaire and his madness.