Yet another Noah’s Ark cartoon!?

Unbelievable. As if the market was not already glutted with Noah’s Ark cartoons, we now have Rock the Boat. Reports Variety:

Gaumont is getting into 3-D animation with the $35 million feature “Rock the Boat,” a two-minute clip of which will preem at next week’s American Film Market.

The Gallic major is bidding to secure a U.S. deal before casting English language thesps to voice the film early next year.

Tale, being pitched as “Some Like it Hot” set on Noah’s Ark, is about a cheetah and a porcupine forced to disguise themselves as other creatures to qualify for a place on the Ark.

Gaumont’s Franck Chorot is producing, with Fabien Suarez and Andre Bessy, first-time helmers, co-directing from an original script by Suarez.

The entirely French-made film has been in production for the past 10 months and is slated for delivery by September 2009, ahead of a Christmas release in France. The French f/x company MacGuff Ligne will handle physical production of the film. . . .

Here are the other recently-released or currently-in-development Noah’s Ark cartoons I have mentioned over the past month:

If you know of any others, by all means, let me know.

OCT 26 UPDATE: Matt Page at the Bible Films Blog has discovered a promo pic for this film at the Gaumont website. It depicts what seems to be an ape holding a pictorial checklist — a gimmick we saw several years ago in Walt Disney’s Fantasia 2000 (1999). 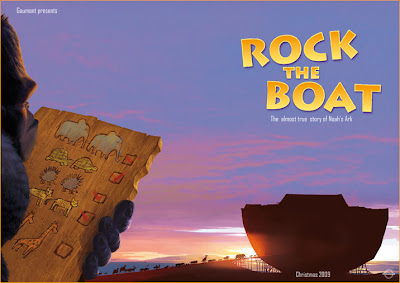 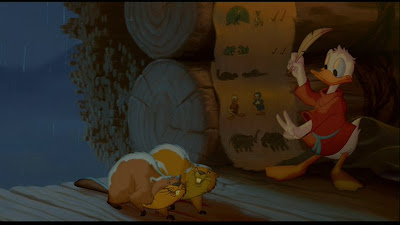 October 25, 2007
Yet another movie not screened for critics.
Next Post

October 25, 2007 Denzel and Travolta team up for Pelham remake
Recent Comments
0 | Leave a Comment
"I have neither noticed that much. I recenty read a leadership book inspired from Cyrus ..."
Hamid Mortazavi Cyrus the Great — a Persian ..."
""AD" stands for "Anno Domini", a Latin expression meaning "In the Year of Our Lord".So ..."
Peter T Chattaway The Chosen — season one, episode ..."
"Why does it say at the start of episode 3 that it takes place 26 ..."
Desiree Chamberlain The Chosen — season one, episode ..."
"What about Hellboy, The Grudge, Ghoulies, and Anaconda?"
45th Spiderbob Group VGCP When R-rated franchises go PG-13 …
Browse Our Archives
get the latest updates from
FilmChat
and the Patheos
Entertainment
Channel
POPULAR AT PATHEOS Entertainment
1