Comment: His Dark Materials: How the Grinch stole God 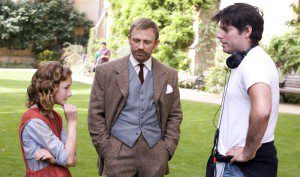 LAST YEAR, many Christians went out of their way to caution their fellow believers against over-reacting to the movie version of The Da Vinci Code. Yes, the film put forth a deeply problematic view of Jesus and church history, but instead of protesting against it, Christians were encouraged to see it, discuss it with their friends and, in general, “engage” with it as part of their broader engagement with the culture.

This year, however, many Christians have begun to raise the alarm over the movie version of The Golden Compass, which comes out December 7. They have sent each other e-mails full of warnings about the “anti-religious” books on which the film is based. They have pointed their friends to websites that describe some of the story’s objectionable content. And there has been little, if any, talk of “engagement”.

What changed between last year and this? What is different about this movie?

Well, for one thing, The Golden Compass, which is the first part of an award-winning trilogy by Philip Pullman known collectively as His Dark Materials — the other two books are called The Subtle Knife and The Amber Spyglass — has been marketed as a children’s fantasy, whereas The Da Vinci Code was ostensibly for adults.

For another, The Golden Compass — which was so hugely successful in its native England that the trilogy has already been dramatized on the radio and on stage there — never became a household word in North America, so many Christians are only just hearing about it now for the first time. They did not have time to resign themselves to the inevitability of the movie as they did with The Da Vinci Code.

Most significantly, though, whereas The Da Vinci Code and author Dan Brown at least paid lip service to God, Jesus and spirituality, however poorly understood, The Golden Compass is the first part of a trilogy that depicts the God of the Bible as a lying, decrepit angel whose death is brought about by two heroic children.

The trilogy also depicts the afterlife as an awful, dreary place, set up by God to keep spirits trapped, and so the two children find a way to let these spirits escape — by disintegrating. Oblivion, rather than eternal life, is the happy ending here.

And finally, the story climaxes with a re-enactment of the Fall, in which the two children discover the pleasures of love and listen attentively as an ex-nun explains to them that “the Christian religion is a very powerful and convincing mistake, that’s all.”

Meanwhile, in the real world, author Philip Pullman has made no secret of how he detests the implicitly Christian stories of C.S. Lewis, of how he wants to set up a “Republic of Heaven” without any sort of kingdom or king, and how he feels “a slight revulsion” whenever he hears the words “spiritual” or “spirituality”.

So if concerned parents are worried that this latest fantasy blockbuster is part of a broader “attack” against the faith, and that the story was written to poison children’s minds against the biblical God . . . well, there is certainly some basis for that.

The filmmakers, however, have gone out of their way to allay such fears.

The studio, New Line Cinema — which also produced the delightful Lord of the Rings trilogy as well as the explicitly Christian film The Nativity Story — says it has made the book’s supernatural elements more generic, kind of like “the Force” in Star Wars. (A different studio similarly dumbed down the recent Chronicles of Narnia movie, turning the Deep Magic into a vague, mystical thing that guides Aslan’s “destiny”.)

Even Pullman, who sometimes expresses great joy in slamming religious beliefs, has begun to publicize the film among liberal Christians such as Donna Freitas, co-author of Killing the Imposter God (Jossey-Bass), who claims the trilogy is a “Christian classic” because it replaces the “medieval” old-man-in-the-sky concept of God with what she considers a more mystical, “panentheistic” view of the divine.

(There is no space to explain her argument in detail here, but suffice it to say that, in the books, the spirits which disintegrate leave their particles behind, and Freitas regards those particles as a basically divine force that fills the world.)

However, efforts to downplay the story’s anti-religious themes have only annoyed the trilogy’s more secularist fans. And so writer-director Chris Weitz, whose previous credits include American Pie and About a Boy, recently told the MTV Movies Blog that, if he gets to make the sequels, he will preserve the story’s more “iconoclastic” elements — which are much more pronounced in those books anyway.

In the interview, Weitz admitted that he had watered down some elements from the first book, but he said he had to do this in order to “popularize this series of extraordinary books and open them to a wider reading public than ever before”.

If the first movie is a hit, then the studio will go ahead with the sequels — and then, said Weitz, he will be able to dig into the more controversial stuff. “The whole point, to me, of ensuring that ‘The Golden Compass’ is a financial success is so that we have a solid foundation on which to deliver a faithful, more literal adaptation of the second and third books,” he said. “This is important: whereas ‘The Golden Compass’ had to be introduced to the public carefully, the religious themes in the second and third books can’t be minimized without destroying the spirit of these books.”

In the light of such comments, it is tempting to say that there really is an “agenda” behind The Golden Compass. But that is no reason to avoid “engaging” with this film, the same way we might with any other. Pullman is a powerful writer with a vivid imagination, and one of the reasons his books are so popular is because he sometimes, despite himself, articulates some very important truths.

Some children, and even some adults, may not be ready to handle Pullman’s books or the movies based on them. But for a fuller exploration of these issues, those who are ready should check out books like Tony Watkins’ Dark Matter (IVP) and Kurt Bruner & Jim Ware’s Shedding Light on His Dark Materials (Tyndale), both of which are fine examples of how to appreciate problematic art even as one critiques it.

For my part, I thought the book version of The Golden Compass was one of the most creative, delightful and suspenseful stories I had read in recent memory — but I cringed at some of the more hateful or dismissive passages in the sequels.

So I hope this first movie is great, and I hope it flops.

Franchising fantasy: Will God or atheism conquer Hollywood?
Every Hollywood studio is seeking the golden ring — a new fantasy franchise that will match or even better the huge international success of The Lord of the Rings trilogy. And once again, the industry is turning to England as the source.
Jamie Portman, CanWest News Service, February 2

Author in race to replace Potter
“His Dark Materials” is expected to earn even more attention — not all of it positive — when studio New Line Cinema releases the first instalment, The Golden Compass, on Dec. 7. If the movie does well at the box office, parts two and three will follow. Online buzz about the film is strong. So is criticism from Christian groups who say the trilogy is anti-Catholic and dangerous for kids.
Toronto Star, November 1

School board pulls ‘anti-God’ book
Halton’s Catholic trustees and staff to review fantasy that is ‘apparently written by an atheist’
Toronto Star, November 22

Complaint over fantasy novel spurs school board review
The Halton Catholic school board is reviewing whether to keep copies of the children’s fantasy novel The Golden Compass in its elementary school libraries, after receiving one complaint.
CBC News, November 22

‘Anti-God’ author defends direction
A decade-old fantasy trilogy by children’s author and avowed atheist Philip Pullman is causing controversy in Ontario, where Catholics are urging their school boards to reconsider whether they are appropriate for elementary schoolchildren.
National Post, November 24

Golden Compass not anti-religious, movie’s star says
Days after an Ontario school board temporarily pulled copies of Philip Pullman’s popular fantasy novel The Golden Compass from their shelves, the people bringing it to the big screen, including actor Daniel Craig, have come to its defence.
Globe and Mail, November 26

Challenges to books on the rise, author says
Book banning is on the wane in Western liberal societies, but the number of challenges against books has never been higher, according to a Toronto writer who has written a book about censorship.
CBC News, November 26

Spinning The Golden Compass
My son read it, and he’s not a believer. But blaming his religious choices on Philip Pullman’s controversial book is just ludicrous
Judith Timson, Globe and Mail, November 27

Entertainment
The New World a feast for the senses...
FilmChat
TRENDING AT PATHEOS Entertainment