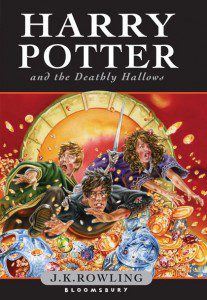 YOU EXPECT many things when you read a new Harry Potter novel: magic, humour, a set of mysteries, a looming battle between good and evil, even some clunky exposition. But you don’t necessarily expect to see quotes from Christian scripture.

And yet, there they are, on pages 266 and 268 of Harry Potter and the Deathly Hallows — the seventh and final installment of J.K. Rowling’s phenomenally popular series about a boy who goes to a school for people born with magical powers.

The book, which runs to 607 pages, is not quite half finished when Harry and his friend Hermione Granger visit a cemetery and see a pair of tombstones. One marks the grave of two relatives of Albus Dumbledore, the wise Hogwarts School of Witchcraft and Wizardry headmaster who died at the end of the previous book. The other marks the final resting place of Harry’s parents, James and Lily Potter.

The quote over the Dumbledore grave says, simply: “Where your treasure is, there will your heart be also.” Treasure is a recurring theme in this book — at one point, Harry and his friends Ron and Hermione have to break into a bank run by goblins — but those who recognize this passage will also remember that Jesus speaks this line after telling his followers to store up treasure in Heaven rather than on Earth.

And that takes us to the quote on the Potter grave, which states: “The last enemy that shall be destroyed is death.” Harry is puzzled, indeed horrified, by this quote at first. Hasn’t Dumbledore told him that the well-organized mind has nothing to fear from death? Isn’t the evil of the Dark Lord Voldemort rooted partly in his own fear of death, and in the obsessive way he and his followers cling to this life at all costs?

Hermione sets Harry right and tells him this quote must refer to something different. “It means . . . you know . . . living beyond death,” she says. “Living after death.”

Incidentally, Harry and Hermione happen to be having this conversation on Christmas Eve. Behind a church. Which, until a page or two before, was filled with people singing Christmas carols.

Over the years, the Harry Potter books have been attacked from various angles. To some, the books promote forms of sorcery that are clearly forbidden in the Bible — though I don’t think either the biblical authors or modern-day practitioners of Wicca have time travel and broomstick rides in mind when they discuss “witchcraft”.

To others, the books are too secular. Unlike the fantasies of C.S. Lewis and J.R.R. Tolkien, the writings of J.K. Rowling make no direct reference to God figures; no one seems to be “in charge”, as it were. And while the wizards speak of holidays and godfathers and so on, they do not seem to have any religion of their own.

Yet, as even conservative Christians like John Granger have noted, the books have always had at least an implicit or residual Christian sensibility. Rowling’s imagination has always been deeply informed by medieval symbolism, and to the extent that those symbols carry images of Christ within them, so too do her books.

Harry Potter and the Deathly Hallows does not completely resolve the confusion over what is literal and what is allegorical in Rowling’s world, and it suffers from other flaws too, but it does suggest more powerfully than any of the previous books that Rowling has a belief — or at least a hope — in the reality of the life to come.

Without giving too much away, suffice it to say that the most crucial moment in this book — and thus the entire series — involves a character obediently going to his death, surrounded by a “cloud of witnesses” (my term, not Rowling’s) from beyond the grave who seem “more real” (Rowling’s term, not mine) than the living.

It is a powerful, powerful portrayal of what is, in essence, an act of martyrdom. And it is quotes from scripture that help to prepare the reader for this moment.

This stands in stark contrast to the sorts of things we see in other best-selling books for children these days. Lemony Snicket’s A Series of Unfortunate Events, for example, takes occasional jabs at religion — the “Cathedral of the Alleged Virgin”, anyone? — and a climactic moment in the final novel involves a friendly snake emerging from a tree to give some people an apple that will heal them.

And then, of course, there is Philip Pullman’s His Dark Materials trilogy, in which God dies the most pathetic death imaginable while an ex-nun explains to a couple of children that Christianity is just “a very powerful and convincing mistake”. A major subplot also celebrates the annihilation of the soul. (The first part of the trilogy, The Golden Compass, makes the jump to the big screen in just a few months.)

In a market where popular and well-written children’s books turn scripture on its head, it is, if anything, refreshing to see scripture invoked in support of the key themes in the Harry Potter books. For this, we should celebrate the books, not condemn them — even as we encourage our children and each other to be more discerning readers.

This is how it will go down
Here’s how it should go down: Harry both dies and lives. It can be done. Rowling once said that she keeps her belief in God private “because if I talk too freely about that, I think the intelligent reader, whether 10 or 60, will be able to guess what’s coming.” Hmm. Guided by this comment, I think Harry could invert the Christian myth, and sacrifice his “godly” wizard identity — death of a sort — and be “reborn” a humble Muggle. I’m not sure of the mechanics of it all, but in the end he would accept this (prophecy-fulfilling) martyrdom as the price for vanquishing Voldemort in some apocalyptic confrontation.
Barbara Kay, National Post, July 18

Churches co-opt Potter’s magic
Poor Harry Potter. As if battling Voldemort, Death Eaters and Dementors wasn’t enough, the boy wizard has also endured the wrath of religious conservatives in the decade since J.K. Rowling’s books first found their way into the hearts of young Muggles the world over. There have been book burnings, book bans and even a declaration by one Catholic Church official last year that Harry Potter is “the devil.” But with Potter fans already lining up ahead of the final book release this Saturday, some Christian denominations are now eschewing condemnation for praise, embracing Ms. Rowling’s tales as powerful religious fables for our time.
Globe and Mail, July 19

Harry Potter, Good or Evil?
globeandmail.com has invited an inter-faith panel to debate these issues online and to take questions about Harry Potter and religion from our readers. The first two mini-essays are printed below. We asked the panelists to answer two questions: What does your religion/faith/creed say about magic, witchcraft and wizardry? How does your faith deal with the phenomenal interest among children — and adults — in Harry Potter’s fictional world?
Globe and Mail, July 19

August 16, 2007 Deathly Hallows -- the article's up!
Recent Comments
0 | Leave a Comment
"Outstanding outline and identification of references and sources as well as background. Thank you so ..."
PaulDT Paul, Apostle of Christ: a scene ..."
"" So now, basically, the Magi are just a substitute for Santa Claus." <- Well... ..."
The 3 Wise Men — not ..."
"Young Chris Kydd is not looking forward to the father and son kayaking trip with ..."
Rafting Tara Billy Graham movies — the ’80s
"Apparently a billion or so people have already figured out the big plot twist to ..."
Buzz Dixon Watch: Trailers for Messiah and The ..."
Browse Our Archives
Follow Us!