I’ve got children’s pop culture and the subversive use of religious imagery on the brain today, and I’m not sure what to do with it.

Yesterday, as I was going through Star Trek: The Animated Series — which I am enjoying, BTW, because I approach it with the same sort of low expectations with which I approach at least half the original series, and sometimes the stories are actually rather good — I came across the episode ‘The Magicks of Megas-Tu’, in which we learn that the Devil is basically just a friendly, misunderstood alien, and so were the people who were persecuted in Salem, Massachusetts (and elsewhere?) for being “witches”, etc. 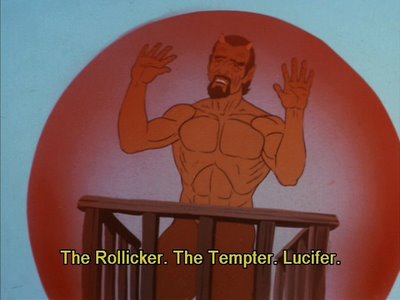 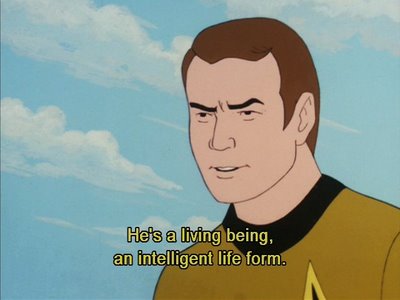 Hence, the final line of dialogue goes to Spock, who tells Kirk (as per the images below) that “this would be the second time Lucifer was cast out, and, thanks to you, the first time he was saved.” 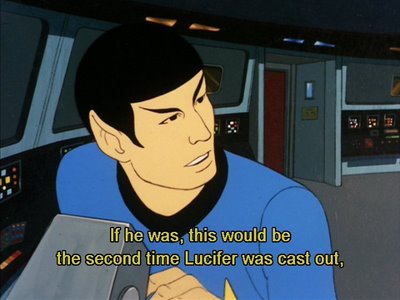 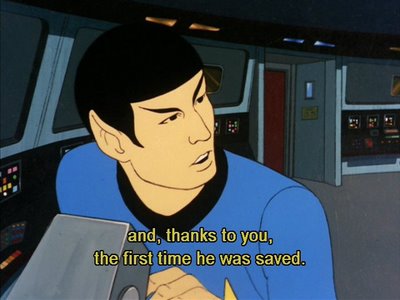 Heavy echoes of the original series episode ‘This Side of Paradise‘, which ended with McCoy saying, “Well, that’s the second time man’s been thrown out of paradise,” and Kirk replying, “No, no. This time we walked out on our own.” And heavy stuff for a Saturday morning cartoon, even one based on a sci-fi series. 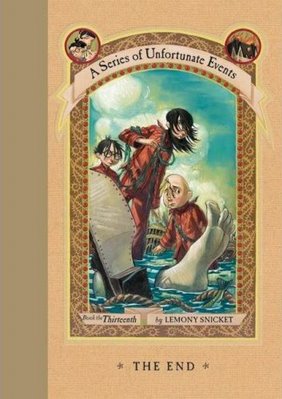 Then there is The End, the 13th and final installment in Lemony Snicket’s A Series of Unfortunate Events, which I finally got around to finishing last night.

Warning: There be spoilers here.

Suffice to say there is a rather climactic moment, at the end of the penultimate chapter, that involves a tree, a snake, and an apple. The key sentence states: “The snake slithered through the gap in the roots of the tree, and whatever the serpent was thinking, it was quite clear from the sibilant sound that came hissing through the reptile’s clenched teeth that the Incredibly Deadly Viper was offering the Baudelaire orphans an apple.”

And the catch is: the snake is friendly, and the apples have the power to heal the orphans of a deadly poison that has been spread by Count Olaf. So, while this is not a direct contradiction of Judeo-Christian mythology like Philip Pullman’s His Dark Materials trilogy or the Star Trek episode mentioned above, it is a turning-on-its-head of an image that is pretty central to that mythology. A motif that represents something bad in orthodox Christianity represents something good in Lemony Snicket.

This is not the first time that I have noticed material in the Lemony Snicket books that is questionable from a religious POV. At least two books — I forget which two, though I think one was The Unauthorized Autobiography — refer to a “Cathedral of the Alleged Virgin”, and the 10th book, The Slippery Slope, ends with a quote from Algernon Charles Swinburne, who “was widely regarded as a very good poet, although some people think his writings about religion were a little too mean-spirited.”

I can handle this stuff, of course. But stories like these are made for children — and now that I have a couple tykes of my own, I find myself wondering how to handle their exposure to such things.

November 24, 2006 Ethnicity in Jesus films – does it matter?
Recent Comments
6 Comments | Leave a Comment
"This was a refreshing read. I'm an average fan of Hellboy but I'm also a ..."
Andrew Mathews Doug Jones on Hellboy and Christianity.
"Great interview! One thing I've wondered since watching Season 1 is why they didn't include ..."
A.J. Cattapan Interview: The Chosen writer-director Dallas Jenkins ..."
"Earth actually does exist in the Dark City universe. Early in the film when John ..."
Edward Clint Dark City and the ambiguous ending.
"I don't always agree with your opinions, but your reviews are never less than interesting ..."
Laura-Lee Rahn The top-grossing Italian movie of 2019: ..."
Browse Our Archives
get the latest from
FilmChat
Sign up for our newsletter
POPULAR AT PATHEOS Entertainment
1