Is Harry Potter a menace to our children’s souls?

Is Harry Potter a menace to our children’s souls? July 9, 2001 Peter T. Chattaway 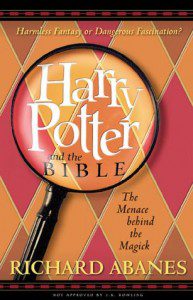 • Richard Abanes: Harry Potter and the Bible: The Menace Behind the Magick, Horizon, 2001.
• Connie Neal: What’s a Christian to Do With Harry Potter?, WaterBrook, 2001.

YEARS AGO, as a teen, I heard a man at a church speak on the evils of popular culture. I expected him to rail against the usual suspects — rock and roll, Star Wars, Disney cartoons with grey-bearded magicians in pointed hats — but I was entirely unprepared for when he turned his attention to My Little Pony. Some of these seemingly innocuous toys, he noted, had wings or horns, like the unicorns and flying steeds of Greek myth, and this, he said, was not good. “There’s nothing wrong with ponies,” he said with utter conviction. “God made ponies. But God didn’t make little unicorns.”

I was surprised that anyone could think such wonderful, imaginary creatures were dangerous, especially since devout Christians such as C.S. Lewis and J.R.R. Tolkien had used these and other mythical beasts in The Chronicles of Narnia and The Lord of the Rings, books that exemplified a Christian worldview. But the speaker was unfazed when I asked him about this afterwards. “Tolkien was a Catholic,” he said, as though this automatically disqualified his works. And Lewis — well, he had his problems, too.

I think of that speaker often when I hear people speak against the perceived evils of the Harry Potter books. J.K. Rowling’s funny, dark and entertaining novels — about a school for children who are born with magical powers — have proved immensely popular, and this success makes many Christians nervous.

Some condemn all stories which depict creatures and forces of nature that God did not create in our world. But, curiously, many of those who attack the Potter books are quite keen to promote the works of Lewis and Tolkien, despite the fact that many of the reasons they give for opposing the one set of stories should, logically, also apply to the others.

This inconsistency seems to be tolerated because Lewis and Tolkien are on ‘our’ side, while no one quite knows how to peg Rowling, who claims to be a Christian but has never publicly discussed her beliefs in detail. Thus, instead of engaging with these stories as works of art that require and encourage the reader’s discernment, Potter’s critics reduce them all to boundary markers: if you like this book and hate that one, you are one of us — but if you don’t, you aren’t.

This inconsistency is one of the main flaws in Harry Potter and the Bible: The Menace Behind the Magick, an otherwise thorough and well-written critique of the Potter books by journalist and occult specialist Richard Abanes.

Although he makes some valid points, Abanes is so determined to find evil in Rowling’s books that he neglects their better qualities; and when he assesses Lewis and Tolkien, he has nothing but praise — even though their writings contain many of the things he finds so offensive in the Potter books.

References to pagan gods? Juvenile heroes who use words like ‘damn’ and other mild profanities? Centaurs who practice a form of astrology? Narnia has them all. Disrespect for authority? Lewis hilariously mocks both modern English schools and the British parliament in the closing pages of The Silver Chair. Blurring the line between reality and fantasy? Tolkien playfully wrote as though hobbits still lived among us, albeit in hiding; and Lewis — who was not above making himself a character in his own fiction — was quite clear that the Aslan of his books was no mere symbol for Christ but, within the framework of his stories, was actually Christ himself, in Narnian form.

Some of Abanes’ criticisms, however, are worth considering. Rowling’s sometimes merciless depiction of Harry’s fat, cruel cousin Dudley could pose problems for younger readers who are overweight. And the way Harry and his friends always seem to get away with breaking the rules is problematic, but not necessarily for the reasons Abanes cites. Rules are not always good, and they sometimes do need to be broken in the service of higher principles — but there are usually consequences for breaking them, and if Harry consistently escapes facing these consequences, and if he never learns how to discern between good and bad rules, then he won’t grow all that much as a character.

Much of what Abanes writes is designed to play on the fears of Christian parents; when he asks if Rowling’s success is due not just to good writing and media hype, but to “an unseen spiritual force of darkness,” he leaves little doubt where he thinks the answer lies.

Lastly, despite his book’s title, Abanes never explores the fact that the Bible itself, like the Potter books, is a collection of stories which act on the imagination in unpredictable ways. If children ought to avoid morally ambiguous stories about young upstarts who lie to protect themselves and sometimes engage in gruesome violence, then what should we do with all those Sunday school stories about David, “a man after God’s own heart?” 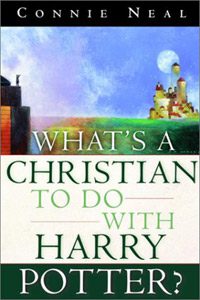 For a more balanced assessment of the Potter controversy, parents may prefer to read What’s a Christian to Do With Harry Potter? by Connie Neal. Neal makes no secret of the fact that she likes the Potter books, but instead of promoting them outright, she looks for ways to resolve the conflict between Christians who disagree on this subject.

She says the Potter debate is a “disputable matter,” like the several issues that Paul addressed in Romans 14 — and she says we need to understand each other better, though we may continue to disagree.

Neal’s writing style leaves a little to be desired, but she makes some very thoughtful points, and she is especially good at explaining the positive role that fantasy plays in children’s psychology. She correctly points out that those who try to link the Potter books to satanic or demonic activity can only do so by imposing outside concepts onto the stories, and she also provides helpful tips for reading the Potter books in a way that is not merely permissible, but might also be profitable for the body of Christ.

These issues will become even more pertinent in the months to come; the first book in Rowling’s series, Harry Potter and the Philosopher’s Stone, is being turned into a movie that will come to theatres in November, mere weeks before the movie version of Tolkien’s The Fellowship of the Ring hits the big screen. These films will give Christians even more of an opportunity to debate the merits of stories in which wizards use magic to defeat the forces of evil.

July 20, 2001 Review: Jurassic Park III (dir. Joe Johnston, 2001)
Recent Comments
1 Comment | Leave a Comment
""AD" stands for "Anno Domini", a Latin expression meaning "In the Year of Our Lord".So ..."
Peter T Chattaway The Chosen — season one, episode ..."
"Why does it say at the start of episode 3 that it takes place 26 ..."
Desiree Chamberlain The Chosen — season one, episode ..."
"What about Hellboy, The Grudge, Ghoulies, and Anaconda?"
45th Spiderbob Group VGCP When R-rated franchises go PG-13 …
"Not yet, but I might do something like that once Season 2 is complete."
Peter T Chattaway The Chosen — season one scripture ..."
Browse Our Archives
get the latest from
FilmChat
Sign up for our newsletter
POPULAR AT PATHEOS Entertainment
1

Entertainment
The New World a feast for the senses...
FilmChat
TRENDING AT PATHEOS Entertainment