For those who grew up devouring the works of C.S. Lewis, as I did, it is impossible to watch a film like The Most Reluctant Convert – which covers Lewis’s childhood and young adulthood, up to and including his conversion to Christianity – with any sort of objectivity. So I might as well lay some of my cards on the table.

For starters, I think Lewis was at his best as an essayist and a writer of fiction, and also as a popularizer of some very complicated ideas. I have probably read The Screwtape Letters more often than any other book outside of the Bible, and it’s a masterfully entertaining and theologically rich exploration of concepts like the Trinity, the nature of temptation, and so on.

But The Screwtape Letters also underscores some of Lewis’s weaknesses as an apologist. As N.T. Wright has pointed out, one of the weakest chapters in that book dismisses “historical Jesus” research more or less entirely, which, for those who are trained in history – as Wright is and Lewis was not – punches a big hole in Lewis’s efforts to discuss who and what Jesus really was. (This became a bit of an issue for me when I was a history and religious-studies double major in university.)

Nevertheless, some people value Lewis primarily for his apologetics, and The Most Reluctant Convert is essentially a movie for them. While the film does bring up some aspects of Lewis’s childhood that are more purely biographical, its ultimate focus is on Lewis’s testimony as a former atheist who came to believe first in God, and then in Jesus, in his early 30s.

The second half of the film’s full title – The Untold Story of C.S. Lewis – is a little odd, as the story of Lewis’s conversion has been told by many people over the years, not least by Lewis himself. Much of the film is drawn from Lewis’s 1955 autobiography Surprised by Joy, and Christian fantasy buffs have always been quick to remind people that The Lord of the Rings author J.R.R. Tolkien played a key role in Lewis’s conversion to Christianity – a fact that is dramatized within this film.

While the film draws heavily from Lewis’s writings, it is directly based on a one-man play starring and written by Max McLean (who stars again here), and it is directed by Norman Stone, who has made a few films about Lewis over the years – most notably Shadowlands, the original 1985 TV-movie starring Joss Ackland as Lewis and Claire Bloom as Joy Davidman, the woman that Lewis married much later in life.

Stone’s efforts to “open things up” – to make the movie work as a movie and not just a monologue – work better in some scenes than others. It’s kind of cute, for example, how Lewis not only talks to the camera but offers to buy a drink for it at the pub, but then it’s kind of odd how Lewis just gets up and walks away from the camera when he’s done.

More conventionally, Stone actually shows us many of the things that McLean’s Lewis describes: the ludicrous pomposity of Lewis’s father when he tries to discipline his sons, the dance class where a young Lewis first feels sexual attraction, the eccentric “Presbyterian atheist” who teaches Lewis logic, the World War I battlefield where a still-teenaged Lewis is injured by mortar fire. Sometimes the older Lewis merely narrates the scenes, and sometimes he stands inside them, watching his younger self like Ebenezer Scrooge visiting moments from his past.

Stone also finds interesting ways to underline some of Lewis’s points visually. When Lewis describes his reasons for being an atheist in the first place, he talks about civilizations “passing away” as he walks down the corridors of a museum filled with skeletons – the stone walls and arches hinting at culture and permanence, the bones suggesting anything but – and then, when Lewis pauses to say that all the pain and death in the world point to there being no God at best or an “evil God” at worst, we notice that he is standing in front of a T-Rex’s menacing face.

I also like the scene where the young Lewis (Nicholas Ralph, star of the new All Creatures Great and Small) and Tolkien (Tom Glenister) are out for a stroll, debating things as usual, and Tolkien says the death and resurrection of Christ is just like all the other myths of that sort except it actually happened – and Lewis, who had never thought of it like that before, pauses in his steps, the wind rushes by, and Tolkien just keeps on walking, unaware of the effect his words have had on his friend.

In his autobiography, and in the film, Lewis talks about his lifelong search for “joy”, a feeling that went beyond grief and pleasure and gave him some sort of connection to a world beyond this one – and in moments like the scene with Tolkien, the film manages to push beyond the monologues and the verbal arguments for and against religion to hint at that sort of feeling, to hint at the experience of conversion.

— The Most Reluctant Convert is available to rent at CSLewisMovie.com until January 2. A version of this review was first published in The Anglican Planet.

December 7, 2021
The importance of poop in The Chosen
Next Post 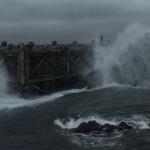 December 10, 2021 Saudi Arabian studio making a movie about Noah's Ark
Recent Comments
0 | Leave a Comment
Browse Our Archives
get the latest updates from
FilmChat
and the Patheos
Entertainment
Channel
POPULAR AT PATHEOS Entertainment
1