It’s not anti-Catholic, because it’s Gnostic. 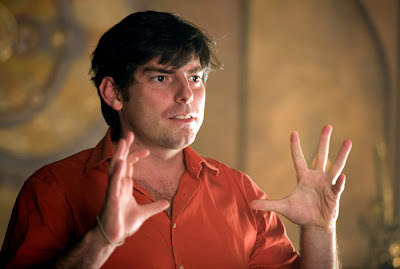 MTV Movies Blog has posted the second part of their interview with Chris Weitz, writer-director of The Golden Compass. It includes these interesting bits:

QUESTION #5 (from HisDarkMaterials.org):
The potential of the upcoming film has become somewhat controversial, mainly due to the misguided notion that the books are deliberately and vehemently anti-religious and that the aim of the series was to “kill” God. Most notable, The Catholic League recently published a rather overzealous article that has been widely spread across a variety of media. How would you react to the statements made; that Philip Pullman is simply a messenger for a virulently atheist cause and is endeavoring to ensnare as many children as possible with his anti-religious message?

ANSWER:
Hey guys, great website. Well, I agree with you. I think that the charge that Pullman wants to “kill God,” in children’s minds or anybody else’s, is wrongheaded, and has been supported with some really selective cutting and pasting. I think Pullman probably has an issue with a certain view of God – which is to say, as a subject worth killing people over. In that regard, the institution that I think most closely resembles the Magisterium is the government of Iran. I think it’s a shame that people are reacting to a movie they haven’t seen by attacking a book they haven’t understood. I also think that “His Dark Materials” is some of the finest literature written in the last fifty years, whether it be for children or adults, and that anyone who reads it with an open mind is likely to come to the conclusion that the “agenda” of the books, if there is one, is to promote and applaud loyalty, kindness, and the courage to follow one’s inner sense of justice.

The Magisterium — a term fraught with Catholic significance — is now some sort of subtle stand-in for an Islamic theocracy? That’s the subtext? Does this mean we should be looking for Muslim symbols, along with all the Orthodox icons and Catholic mottos that Weitz has already indicated will be scattered throughout the film? Somehow, I don’t think so, but we will see.

It is interesting, though, to see how everyone involved in the making of this film seems to be eager to say that the villainous Christians in this trilogy are actually metaphors for other villains in the real world; author Philip Pullman, for example, has said that one of the worst “theocracies” in recent times was the atheist Soviet Union. If the real point of this story is to oppose the abusive misuse of authority in all of its forms, then why is this series so particular in its use of Christian mythology, for lack of a better word? Where are the overt references to Islam or Marxism? Why can’t the storytellers just say what they mean — whether in the story itself, or in their promotion of it?

QUESTION #6: (from Darren):
You have said that “I will not be involved with any ‘watering down’ of books two and three” whilst Nicole Kidman has been quoted as saying “I wouldn’t be able to do this film if I thought it were at all anti-Catholic.” Without ‘watering down’ the main subject matter of the remaining books, how do you propose to deal with the sensitivities of Ms. Kidman?

ANSWER:
I think the key to your question is whether books two and three are anti-Catholic or not. Some people, for instance Bill Donahue of the Catholic League, think that they are. I do not. My feeling about how some people have approached the intellectual and theological content of “His Dark Materials” is that they’re refusing to deal with its variety and subtlety. If you look at the proto-myths behind books 2 and 3, you come up with the Gnostic idea of a demiurge – a fallen angel who sets himself up as God and rules by oppression. To use this rather obscure early Christian philosophy as a root-myth is to me not specifically anti-Catholic, any more than a film involving a Greek myth would. It sets up an alternate series of events in an alternate world.

Also important is the idea of the “felix culpa” – the notion that the fall of man was not a bad thing but a good one. This is a medieval theological concept, invoking the fall as the opportunity without which the messiah would not have come. In “His Dark Materials,” the “felix culpa” is Lyra’s falling in love with Will. Again, I don’t see how one is more anti-Catholic an idea than the other. It’s true that Pullman takes issue with dogma and with the abuse of religion for political power, but the critique about dogma applies far more widely than Catholicism or even religion; and the last time that the Catholic church directly exerted political power on a state level was during the middle ages.

In other words, I think that an accurate adaptation of “The Subtle Knife” and “The Amber Spyglass” would not be anti-Catholic. What would be anti-Catholic would be to go out of one’s way to attack people’s beliefs, which I sometimes think is what people have in mind when they want to apply their own ideas and glosses of “His Dark Materials,” which have been formed outside of the context of the books, to the films.

At the risk of losing the “subtlety” that Weitz rightly mentions here, I think the early Gnostics would have been surprised if anyone had told them that they were not somehow opposed to, and thus “anti-“, the orthodox catholic Church of their time. The Gnostic creation myths explicitly identify the evil demiurge with the Old Testament God, and there is nothing in traditional Christian teaching that allows us to say that the God of Abraham, etc., was actually evil. Indeed, New Testament texts such as the Gospel of John and Paul’s first letter to Timothy seem at times to have been written with the express purpose of warning people away from Gnostic heresies.

But this is a discussion that could take quite a while, and I haven’t got the time to get into it all that deeply at the moment. Suffice it to say that this is bringing back memories of all the debates I have had over The Truman Show (1998; my review), and whether the manipulative, deceiving Ed Harris character there is a stand-in for God, or the Devil, or both.

Matters are confused even further when the god-demon is explicitly identified with existing gods in existing mythologies, and when the heroes of the new story behave in exactly the same way that the villains of those mythologies do — tempting young couples to eat the forbidden fruit, and so on. Are those just superficial elements on a story that, deep down, actually affirms the original mythology? Maybe, maybe not, and so the debate rages.

Finally, re: the “felix culpa”. If, as Weitz says, the fall of man was a “good thing” because it led to the coming of the messiah, and if the Lyra-Will relationship is a re-enactment of this fall, then where is the messiah that follows them in this story? Or would it perhaps be more accurate to say that Pullman’s story posits the Fall as a good thing in and of itself, rather than as an evil thing which paved the way for a greater good? (Perhaps the real “felix culpa” in this trilogy would be something like, say, the murder committed by Lord Asriel — because it opens up a portal into other worlds, through which Lyra is ultimately able to fulfill her destiny.)

Side note: Some commentators, including myself, have made much of the fact that Pullman’s story makes elaborate use of the Old Testament and church history but never says what role Jesus played in getting from one to the other. However, Tony Watkins, the British author of Dark Matter: Shedding Light on Philip Pullman’s Trilogy His Dark Materials, has interviewed Pullman and looked at some of his notes, and he says Jesus plays a similar role in the back-story to ‘His Dark Materials’ that he played in Gnostic mythology, as a dispenser of divine wisdom who opposed the Old Testament God and was misrepresented by some of his followers. In other words, Pullman’s Jesus is “anti-Catholic”, too.