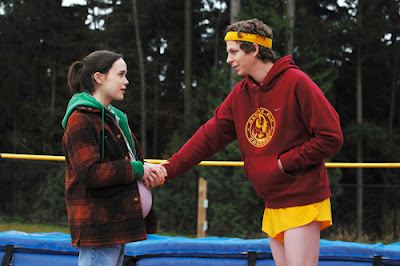 “On film and in real life, two pregnant 16-year-olds spark moral debate.” So reads a headline on a recent story by the Associated Press — referring, of course, to the revelation two days ago that Britney Spears’s sister Jamie Lynn is pregnant, and also to the movie Juno, which goes into wide release on Christmas Day after an enormously successful three weeks in limited release. Both of them were beaten to the punch, though, by Keisha Castle-Hughes, who also became pregnant at the age of 16 last year shortly after finishing work on The Nativity Story — in which she played perhaps the most famous pregnant teenager of them all.

December 21, 2007 National Treasure -- the review's up!
Recent Comments
0 | Leave a Comment
"I have neither noticed that much. I recenty read a leadership book inspired from Cyrus ..."
Hamid Mortazavi Cyrus the Great — a Persian ..."
""AD" stands for "Anno Domini", a Latin expression meaning "In the Year of Our Lord".So ..."
Peter T Chattaway The Chosen — season one, episode ..."
"Why does it say at the start of episode 3 that it takes place 26 ..."
Desiree Chamberlain The Chosen — season one, episode ..."
"What about Hellboy, The Grudge, Ghoulies, and Anaconda?"
45th Spiderbob Group VGCP When R-rated franchises go PG-13 …
Browse Our Archives
get the latest updates from
FilmChat
and the Patheos
Entertainment
Channel
Related posts from FilmChat