The Iranian Jesus movie and the end times 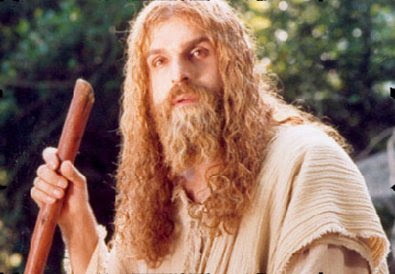 Breitbart.com posted an article over the weekend about an Iranian Muslim life-of-Jesus movie — and it sounds like this may be one of the two films I wrote about here over a year ago. Jesus, the Spirit of God is directed by Nader Talebzadeh, whose name also appears on the website for The Messiah — and while Talebzadeh says he made the film to emphasize the “common ground” between Christians and Muslims, he also goes on to say that his film shows how Christians got the story “wrong”:

A director who shares the ideas of Iran’s hardline president has produced what he says is the first film giving an Islamic view of Jesus Christ, in a bid to show the “common ground” between Muslims and Christians.

Nader Talebzadeh sees his movie, “Jesus, the Spirit of God,” as an Islamic answer to Western productions like Mel Gibson’s 2004 blockbuster “The Passion of the Christ,” which he praised as admirable but quite simply “wrong”.

“Gibson’s film is a very good film. I mean that it is a well-crafted movie but the story is wrong — it was not like that,” he said, referring to two key differences: Islam sees Jesus as a prophet, not the son of God, and does not believe he was crucified. . . .

Even in Iran, “Jesus, The Spirit of God” had a low-key reception, playing to moderate audiences in five Tehran cinemas during the holy month of Ramadan, in October.

The film, funded by state broadcasting, faded off the billboards but is far from dead, about to be recycled in a major 20 episode spin-off to be broadcast over state-run national television this year. . . .

The director is also keen to emphasise the links between Jesus and one of the most important figures in Shiite Islam, the Imam Mahdi, said to have disappeared 12 centuries ago but whose “return” to earth has been a key tenet of the Ahmadinejad presidency. . . .

The bulk of “Jesus, the Spirit of God”, which won an award at the 2007 Religion Today Film Festival in Italy, faithfully follows the traditional tale of Jesus as recounted in the New Testament Gospels, a narrative reproduced in the Koran and accepted by Muslims.

But in Talebzadeh’s movie, God saves Jesus, depicted as a fair-complexioned man with long hair and a beard, from crucifixion and takes him straight to heaven.

“It is frankly said in the Koran that the person who was crucified was not Jesus” but Judas, one of the 12 Apostles and the one the Bible holds betrayed Jesus to the Romans, he said. In his film, it is Judas who is crucified. . . .

Shiite Muslims, the majority in Iran, believe Jesus will accompany the Imam Mahdi when he reappears in a future apocalypse to save the world.

And Talebzadeh said the TV version of his film will further explore the links between Jesus and the Mahdi — whose return Ahmadinejad has said his government, which came to power in 2005, is working to hasten.

Shiites believe the Mahdi’s reappearance will usher in a new era of peace and harmony.

“We Muslims pray for the ‘Return’ (of Imam Mahdi) and Jesus is part of the return and the end of time,” Talebzadeh said.

“Should we, as artists, stand idle until that time? Don’t we have to make an effort?”

These last paragraphs get me wondering: Does Muslim pop culture have the equivalent of Thief in the Night, The Omega Code, Left Behind and other Christian end-times movies?

January 17, 2008 "Under construction" isn't just a metaphor.
Recent Comments
4 Comments | Leave a Comment
""AD" stands for "Anno Domini", a Latin expression meaning "In the Year of Our Lord".So ..."
Peter T Chattaway The Chosen — season one, episode ..."
"Why does it say at the start of episode 3 that it takes place 26 ..."
Desiree Chamberlain The Chosen — season one, episode ..."
"What about Hellboy, The Grudge, Ghoulies, and Anaconda?"
45th Spiderbob Group VGCP When R-rated franchises go PG-13 …
"Not yet, but I might do something like that once Season 2 is complete."
Peter T Chattaway The Chosen — season one scripture ..."
Browse Our Archives
get the latest updates from
FilmChat
and the Patheos
Entertainment
Channel
POPULAR AT PATHEOS Entertainment
1