Is that John Hurt in the Crystal Skull trailer?

Is that John Hurt in the Crystal Skull trailer? February 16, 2008 Peter T. Chattaway

Two months ago, John Hurt refused to divulge who he plays in Indiana Jones and the Kingdom of the Crystal Skull — many fans think he might be playing Abner Ravenwood, father of Indy’s erstwhile girlfriend Marion — but he did say this:

Well, I’m all in the second half. I’m one of what I called the Famous Five. . . . It was Karen [Allen], me, Harrison [Ford], Shia [LaBeouf], and Ray Winstone, who is one of the Famous Five but dodgy.

So, do we get any glimpses of this famous fivesome in the trailer that came out two days ago? Why yes, I believe we do — but the character who is almost certainly being played by John Hurt is always kept in the distance or at the very edge of the frame. And we never get anything resembling a good look at his face.

Still, all that said, I think it is safe to say that Hurt’s character has long-ish hair, is wearing a poncho, and needs to be helped by Indiana Jones as they all run down the steps outside the temple.

Click on the images below to see bigger versions of them:

APR 30 UPDATE: Bit of a delayed reaction here, but I finally got around to capturing the shot that someone mentioned in the comments; we get an even better look at Hurt in the new trailer:

MAY 1 UPDATE: Official Pix is now selling these two photos: 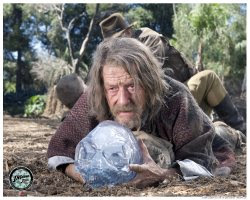 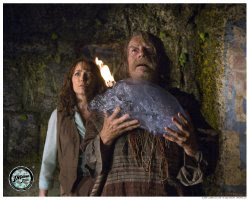 MAY 3 UPDATE: The new trailer is now up at the official website, in a high-def version that gives us this much better image:

MAY 13 UPDATE: John Hurt is interviewed in a bonus feature on the new “special edition” of Raiders of the Lost Ark (1981) — and the identity of his character is apparently revealed there. 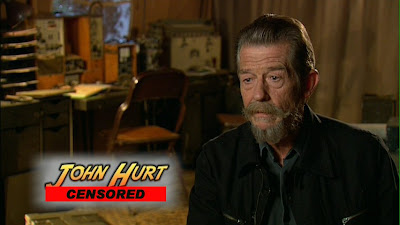 February 16, 2008 Indiana Jones -- a real American hero?
Recent Comments
2 Comments | Leave a Comment
"I have neither noticed that much. I recenty read a leadership book inspired from Cyrus ..."
Hamid Mortazavi Cyrus the Great — a Persian ..."
""AD" stands for "Anno Domini", a Latin expression meaning "In the Year of Our Lord".So ..."
Peter T Chattaway The Chosen — season one, episode ..."
"Why does it say at the start of episode 3 that it takes place 26 ..."
Desiree Chamberlain The Chosen — season one, episode ..."
"What about Hellboy, The Grudge, Ghoulies, and Anaconda?"
45th Spiderbob Group VGCP When R-rated franchises go PG-13 …
Browse Our Archives
get the latest updates from
FilmChat
and the Patheos
Entertainment
Channel
POPULAR AT PATHEOS Entertainment
1