My mother is co-presenting a movie! 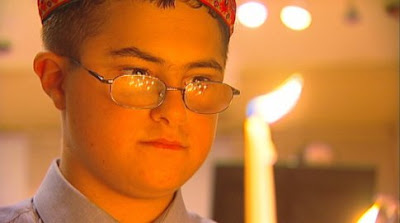 Life is busy and I’m going to be out of town for a few days, so I hadn’t really paid any attention to the fact that the Vancouver Jewish Film Festival is upon us again, but I was just informed that my mother will be co-presenting a screening of the documentary Praying with Lior on Thursday afternoon, and discussing the special harps she has been selling for the last few years, which were originally developed in Europe for people with Down Syndrome. (The film is about a rabbi’s son with Down Syndrome who is considered by some to be a “spiritual genius” because of his obsession with prayer.) I’ve been curious about this film for a while anyway, ever since reading about it in Variety and the New York Times, so if there is any way I can make it to this screening, I will. In the meantime, you can all get your tickets here.

March 31, 2008 Too cute.
Recent Comments
3 Comments | Leave a Comment
"I have neither noticed that much. I recenty read a leadership book inspired from Cyrus ..."
Hamid Mortazavi Cyrus the Great — a Persian ..."
""AD" stands for "Anno Domini", a Latin expression meaning "In the Year of Our Lord".So ..."
Peter T Chattaway The Chosen — season one, episode ..."
"Why does it say at the start of episode 3 that it takes place 26 ..."
Desiree Chamberlain The Chosen — season one, episode ..."
"What about Hellboy, The Grudge, Ghoulies, and Anaconda?"
45th Spiderbob Group VGCP When R-rated franchises go PG-13 …
Browse Our Archives
get the latest updates from
FilmChat
and the Patheos
Entertainment
Channel
POPULAR AT PATHEOS Entertainment
1