Bill C-10 could, in theory, trigger an election. 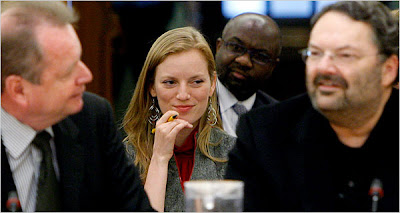 The debate over Bill C-10, the proposed law that would permit the government to deny tax credits to Canadian films that are deemed to be offensive in some way, has now been kicked up to another level or two.

First, the Globe and Mail reports that the federal finance minister has said he considers this bill a matter of confidence, meaning the opposition parties could trigger an election if they vote the legislation down — and it looks like the opposition parties are still vowing to amend the bill against the finance minister’s wishes anyway. However, the opposition Liberals have frequently threatened to bring down the Tory government over the past several months and have consistently backed off from doing so in the end. What’s more, the proposal that has everyone so upset right now was originally drafted by the Liberals when they were in power — so it might be difficult for them to take all that hard a line against the proposed law, or to campaign on their opposition to it.

At any rate, the fact that the Tories have exploited a Liberal proposal to censure unacceptable works of art just demonstrates why such laws shouldn’t be created in the first place: You may think that the law you create will only be used to censure works of art that you find offensive, but once another political party comes to power, you can be sure that they will use the mechanisms you created to pursue agendas of their own — agendas that might conflict with yours.

Meanwhile, the debate has attracted attention south of the border; the New York Times ran a story on Bill C-10 yesterday — the source of the Sarah Polley photo above — that didn’t add anything new to the coverage except for the fact that the story has now been covered in The Paper Of Record.

And of course, people continue to speak out against the bill. John Moore of the National Post asks, among other things, why the government can’t spare money for the arts if it can afford to “pay pork farmers $50-million for their unprofitable pigs”, as it did a couple weeks ago. He adds: “The problem with Puritanical societies is they are renowned for their chastity and temperance, but never for their art or creative leisure.”

MAY 9 UPDATE: The Globe and Mail reports that some Liberal senators disagree with Finance Minister Jim Flaherty’s claim that Bill C-10 is a matter of confidence. Yoine Goldstein says Flaherty can make it one if he chooses to, but since the bill concerns mere details of tax law and is not a full-fledged budget, it is not automatically a matter of confidence, per se.

May 4, 2008 The Muslim movie about Jesus, yet again.
Recent Comments
1 Comment | Leave a Comment
"I have neither noticed that much. I recenty read a leadership book inspired from Cyrus ..."
Hamid Mortazavi Cyrus the Great — a Persian ..."
""AD" stands for "Anno Domini", a Latin expression meaning "In the Year of Our Lord".So ..."
Peter T Chattaway The Chosen — season one, episode ..."
"Why does it say at the start of episode 3 that it takes place 26 ..."
Desiree Chamberlain The Chosen — season one, episode ..."
"What about Hellboy, The Grudge, Ghoulies, and Anaconda?"
45th Spiderbob Group VGCP When R-rated franchises go PG-13 …
Browse Our Archives
get the latest updates from
FilmChat
and the Patheos
Entertainment
Channel
POPULAR AT PATHEOS Entertainment
1