Expelled — coming to Canada after all? 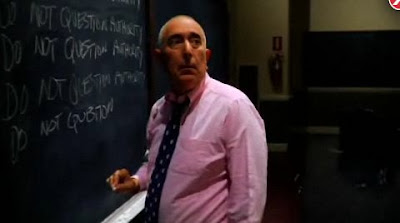 Various blogs and websites — here, here, and here — are reporting that the pro-Intelligent Design documentary Expelled: No Intelligence Allowed may be coming to Canadian theatres June 6. The rumour had better be right, since Ben Stein has already begun to promote the film on Canadian TV, chatting about it a few nights ago on CBC’s The Hour with George Stroumboulopoulos — where, bizarrely, he seemed to imply that gravity and the laws of thermodynamics fall under the heading of evolutionary theory.

This reminds me, I’ve been meaning to post some extra thoughts that I’ve had on the film since I first commented on it one month ago, shortly after it was released in the United States. (Many thanks, by the way, to the people who wrote me to answer David Berlinski’s question and explain what a “species” is!)

Let’s start with John Derbyshire‘s post from a few weeks back, when he noted that Ben Stein made the following comments while promoting this film on the Trinity Broadcasting Network:

When we just saw that man, I think it was Mr. Myers [i.e. biologist P.Z. Myers], talking about how great scientists were, I was thinking to myself the last time any of my relatives saw scientists telling them what to do they were telling them to go to the showers to get gassed … that was horrifying beyond words, and that’s where science — in my opinion, this is just an opinion — that’s where science leads you. . . .

Love of God and compassion and empathy leads you to a very glorious place, and science leads you to killing people.

Okay, that’s being snarky. But you have to wonder why a film that demands “academic freedom” for people pursuing a, let’s say, unconventional sort of science would be constructed and promoted in such a way as to denigrate science itself. How can the makers of this film say they want ID to have a place at the table when the table itself is so horrifying to them? (I have always found it interesting that, when I interviewed Stein myself, he issued his strongest denunciation of scientists while answering a question I had asked about the film’s treatment of ID scientists!)

In a similar vein, one of the best critiques I have read of this film was written by Jim Manzi and posted a couple weeks ago at National Review. Manzi makes much the same point that I made last month, regarding how the movie needs to demonstrate some of the actual alleged science behind ID if it wants ID to enjoy any sort of “academic freedom” — but he makes the point more methodically, and in greater detail.

Then there is the political element.

When I interviewed Stein, he said he was approached by the film’s producers because he was one of the few “conservatives” in Hollywood. But is ID necessarily a “conservative” movement? Various people in the film argue that ID, as a science, is not tied to any particular religion — and indeed, Stein himself is Jewish, though the film still fits broadly within the category of “Christian filmmaking” — so why would they imply that it is tied to a particular end of the political spectrum? (As my colleague Josh Hurst points out, it is odd how “footage of Ronald Reagan starts to pop up everywhere” in the film’s final moments.) Shouldn’t ID be just as politically neutral as it is religiously neutral? And shouldn’t it be presented as something that stands or falls on its own scientific merits?

Matters are further confused when the film quotes Eugenie Scott to the effect that many Christians believe evolution and religion are compatible, and then the film cuts to a journalist who asserts first that all religions can be broken down into “liberal” and “conservative” camps, and then that liberals will side with anyone against the “fundamentalists”. The clear implication seems to be that only “liberals” will accept evolutionary theory — yet surely there are many politically and even theologically conservative Christians and Jews who accept it, or are open to it, as well. (Hint: One of them is writing this post.)

Finally, a point of terminology.

One of the filmmakers wrote me after my review went online to say that I had gotten my facts wrong when I wrote that “the film never acknowledges that some ID theorists actually believe in evolution, albeit perhaps only to a point.” He sent me a few quotes from the film which, he claimed, did affirm “evolution” of some sort. But when you look at them closely, it turns out they don’t — at least not in the sense that most people use that word.

Paul Nelson, a young-earther, affirms nothing more than “change over time”, while Jonathan Wells affirms nothing more than “minor changes within species” — and he explicitly belittles Darwin’s efforts “to show how this same process leads to new species, in fact, to every species.” William Dembski comes closest to affirming “evolution” as most people use the term, except he pours on lots of qualifiers and never mentions any of the particulars of evolutionary theory except to marginalize them; after stressing the limitations of “natural selection”, whatever those limitations might be, he concludes: “What we’re finding with Darwin is that he had some valid insights, but it’s not the whole picture.”

So nowhere in this film do any of the IDers affirm, say, common descent, which is a key part of the sort of evolutionary theory that I had in mind when I wrote that sentence in my review. Nowhere does anybody say, as I gather leading ID theorist Michael Behe has said, that animals did evolve more or less as Darwin said they did, but there are just some things we can’t account for at the microscopic, cellular level. So I think my point stands. (Behe does not appear in this film at all, by the way — though he does appear in the ID-skeptical documentary Flock of Dodos (2006).)

The film has grossed $7.5 million since opening in the United States five weekends ago, which makes it one of the dozen top-grossing documentaries of all time. It will be interesting to see what waves this film makes, if any, should it actually be released here in Canada — especially given that it is a Canadian production.

May 20, 2008 Canadian box-office stats -- May 18
Recent Comments
9 Comments | Leave a Comment
Browse Our Archives
get the latest from
FilmChat
Sign up for our newsletter
POPULAR AT PATHEOS Entertainment
1