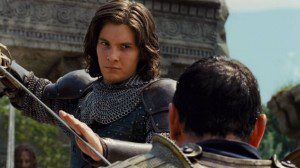 For all their talk of staying true to the spirit of C. S. Lewis’s novels, the makers of the Narnia films have frequently deviated from the books in ways both big and small, and the liberties they take with Prince Caspian — which echo but go far, far beyond the liberties they took with The Lion, the Witch and the Wardrobe — both help the film and hurt it. They help because you can sense that co-writer and director Andrew Adamson is finally making the big epic fantasy battle movie that he really wanted to make the first time around, and his devotion to that vision holds Prince Caspian together and makes it a more consistent, and consistently entertaining, sort of film than Wardrobe was. But in steering the film closer to his own vision, Adamson steers it away from Lewis’s, and so it loses some of the book’s core spiritual themes.

The basic storyline is still there, though it has been re-arranged somewhat. Instead of beginning in England, with the four Pevensie children sitting at a train station, the film begins in Narnia, with a woman giving birth and a man, Prince Caspian (Ben Barnes), being woken in the middle of the night and told that he must flee for his life. It turns out the woman in question is Caspian’s aunt, and she has just given birth to a son, and this gives her husband, Lord Miraz (Sergio Castellitto), the opportunity he needs to seize the throne that has been vacant ever since Caspian’s father died. But first Caspian has to hide — in a wardrobe! — from assassins with crossbows who enter his room only to find that he is not in bed. And then he has to ride, ride, ride into the night while being pursued by several of Miraz’s soldiers.

Meanwhile, back in England, the four Pevensie children are getting ready to go back to school. One year has passed since their adventures in Narnia, and they are still getting used to the fact that they are no longer grown-up kings and queens of some far-off magical land but, rather, children who still have to deal with kids their own age. Peter (William Moseley), in particular, resents the fact that he is no longer High King, and he is all too eager to get into fights with other boys — fights that he apparently cannot win until his younger brother Edmund (Skandar Keynes) steps in and bails him out. But then, far away in Narnia, Caspian calls for help by blowing on the magic horn that once belonged to Queen Susan (Anna Popplewell), and suddenly the four Pevensie children find themselves whisked away to their former castle.

However, while only one year has gone by in our world, over a thousand years have passed in Narnia, and so the castle that once belonged to the Pevensies is now in ruins. What’s more, it turns out that the humans who now rule Narnia — a race known as the Telmarines — have driven the magical creatures of Narnia so deep into hiding that many people simply assume that the minotaurs, centaurs and other creatures are nothing more than “fairy tales.” Even the Narnians themselves have lost their magic. One of the things this movie gets very right is the dismay Lucy (Georgie Henley) feels when she realizes the trees no longer “dance” the way they used to, or the way Susan — who had difficulty believing in talking animals in the first film — is now caught off-guard by the sight of a bear that doesn’t talk.

Moments like these hint at the themes that Lewis explored in his book. For Lewis, the modern world was a lot like the world that Caspian had grown up in — a world that had cast aside myth and magic and reduced the world to little more than a collection of parts. (In The Voyage of the Dawn Treader, Eustace declares that stars in our world are nothing more than flaming balls of gas, and he is told that, no, even in our world, that is not what a star is but only what it is made of.) Lewis wanted to give his readers — including Christians who had unthinkingly bought into modernity — a taste of the spiritual realm that animates our physical world. And since he believed that the pagan, pre-Christian man had a greater aptitude for the spiritual realm, and was thus easier to convert, than the secular, post-Christian man, Lewis wrote the Narnia books to introduce his readers to a “baptized” form of paganism. Nowhere is this more explicit than in the original book version of Prince Caspian, in which the Christ-figure Aslan literally dances with the Greco-Roman god Bacchus.

But Adamson and his co-writers, Christopher Markus and Stephen McFeely, show no interest in that particular theme. Gone from this film are any and all references to Bacchus, Silenus or the Maenads — figures as important to this story as Father Christmas was to Wardrobe — and gone too are the scenes in which Aslan and his followers trash the schools that teach Narnian children not to believe in myths and fairy tales. And because those scenes are missing, the divine lion Aslan (voice of Liam Neeson) has very little to do. Indeed, Aslan is almost entirely written out of the movie altogether. His first appearance — an actual encounter with Lucy in the book — is here heavily abbreviated, and quickly revealed to be a dream. It is only in the film’s final reels that Aslan indisputably steps onto the stage and takes action.

Because Aslan is so remote from them, the Pevensies are forced to figure things out for themselves, with varying results. Peter’s hunger for power and glory leads him to act just as rashly in Narnia as he had been acting in England — but since he is leading armies into battle now, his rashness has lethal, devastating consequences. What’s more, he is strongly, strongly tempted to make a deal with the devil, as it were, to achieve his goals. (This may be the biggest, most potentially controversial change to a once-noble character since Faramir felt the lure of the Ring in Peter Jackson’s version of The Two Towers.) However, some important and powerful themes do emerge, as Lucy reminds Peter that they need to actually look for Aslan and be faithful to what they already know of him, if they are ever to actually see him.

The supporting characters, including the pessimistic dwarf Trumpkin (Peter Dinklage) and the amusing but lethal warrior mouse Reepicheep (voice of Eddie Izzard), are nicely handled — Reepicheep has one encounter with a cat that is even funnier when you recall that Adamson co-directed Antonio Banderas’s Puss in Boots in Shrek 2 — and the battle scenes include at least one brilliant tactic that I don’t think we have seen in any of the other recent ancient or medieval war movies.

As a director, Adamson is still borrowing from Jackson and other filmmakers — note the flying-arrow shot lifted straight out of Robin Hood: Prince of Thieves — but his direction is also more assured this time, perhaps because he gives himself greater freedom to change things as he sees fit. It helps that Prince Caspian, as written by Lewis himself, is a more complex story, with political intrigue among the villains and a deeper sense of Narnian history. Some oddities still creep in, though, from the abundance of crossbows, which everyone brandishes as though they were as easy to use as automatic weapons, to a flirtation between Susan and Caspian that seems to come from out of nowhere late in the story. (Popplewell told NarniaWeb the film did have a romantic subplot at one point, but most of it got left on the cutting-room floor.)

And then there is the swordplay, which is so pervasive that it begins to get a little tiring. (I found myself thinking of The Matrix Reloaded, and how the characters there seemed to get into extended martial-arts scenes simply to say “hello.”) But on a summer-popcorn-movie level, it all works. Prince Caspian is a reasonably enjoyable and diverting bit of entertainment, and it may satisfy people who have been waiting for a worthy successor to the movie version of The Lord of the Rings but felt the previous Narnia movie wasn’t quite it. And if it lacks Lewis’ message, oh well, with any luck, it will turn people on to the book, which is where the real magic lies.

1. When Lucy says that she saw Aslan, Peter asks why he didn’t see Aslan too. Lucy replies, “Maybe you weren’t looking.” Was Lucy looking? In what way? Do we have to prepare ourselves in any way to see God? Can he reveal himself to us if we are not looking for him?

2. In another scene, Peter says he wishes Aslan had given them some “proof” of his presence in the forest, and Lucy replies, “Maybe we’re the ones who need to prove ourselves to him.” What do you make of that response? How do we “prove ourselves” to God? Does he ever ask us to “prove ourselves”? Why or why not?

3. Caspian tells Aslan, “I do not think I am ready [to become King of Narnia],” to which Aslan replies, “It’s for that reason, I know you are.” How does this compare to Peter’s desire for the glory and power that come with being High King? What does this film say about leadership and the kinds of leaders who are worthy of it?

4. In the film, Aslan tells Lucy, “Every year you grow, so shall I.” In the book, Aslan says, “Every year you grow, you will find me bigger.” Is this a significant change? In another scene, the film version of Aslan tells Lucy, “We can never know what would have happened.” In the book, he says, “Nobody is ever told that.” Is this a significant change? Do changes like these affect our understanding of Aslan’s divinity? If so, how? If not, why not?

Prince Caspian is rated PG for epic battle action and violence. There are lots of shootings (with crossbows, not guns) and swordfights throughout the film, as well as a few people getting stabbed in the back, etc. — but all of it is kept fairly bloodless and non-explicit. A scene in which a hag and a werewolf try to bring the White Witch back from the dead may also be too scary for very young children.