Two-Face — too much, too soon? 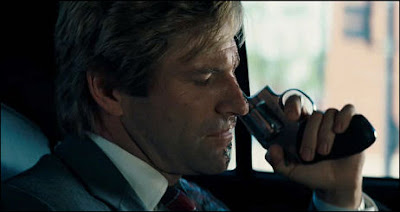 There’s been a lot of talk lately about The Dark Knight and Harvey Dent‘s transformation into Two-Face. On Sunday, Jeffrey Wells posted an image from the new trailer, copied above, that hints — just barely barely hints — at the nature of the transformation. Then, on Monday, Comic Book Resources posted a seriously grotesque image taken from the other side of Harvey Dent’s face; the website eventually took the image down at the request of the studio, but you can still see it at Ain’t It Cool News.

Finally, the Los Angeles Times ran an interview over the weekend with Aaron Eckhart, who plays Dent, and Eckhart seems to give away a major spoiler — though the spoiler in question is also hinted at strongly in the new trailer for the film. Maybe it occurs early enough in the film that all the people involved figured they could let it leak, and save other surprises for later?

At any rate, with regard to Two-Face’s appearance, Eckhart does say: “I can tell you that, basically, when you look at Two-Face, you should get sick to your stomach. . . . It’s like you would feel if you met someone whose face had pretty much been ripped off or burned off with acid. . . . There are fans on the Internet who have done artist’s versions of what they think it will look like, and I can tell you this: They’re thinking small; Chris is going way farther than people think.”

The Times reporter also says that Two-Face’s wounds “are structurally deeper than in the comics” — and that certainly fits the description of the photo that was leaked, and which I am declining to post here because I kind of wish I hadn’t seen that image myself before seeing the movie.

May 8, 2008 The Year One -- set photos surface
Recent Comments
1 Comment | Leave a Comment
"I certainly hope to! Just haven't had the time to do Season 2 yet."
Peter T Chattaway The Chosen — season one scripture ..."
"Hi Peter.Thanks for this extensive list. Will you be doing the same for all seasons? ..."
Meelperd The Chosen — season one scripture ..."
"I have neither noticed that much. I recenty read a leadership book inspired from Cyrus ..."
Hamid Mortazavi Cyrus the Great — a Persian ..."
""AD" stands for "Anno Domini", a Latin expression meaning "In the Year of Our Lord".So ..."
Peter T Chattaway The Chosen — season one, episode ..."
Browse Our Archives
get the latest updates from
FilmChat
and the Patheos
Entertainment
Channel
POPULAR AT PATHEOS Entertainment
1