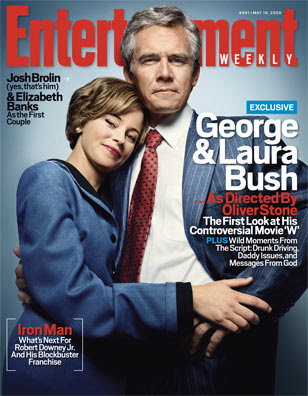 A couple new items about Oliver Stone’s George W. Bush biopic W surfaced today. The main one, of course, is the Entertainment Weekly cover story, which notes that the film starts shooting next week, no one has been cast as Dick Cheney yet, and the script has been rewritten at least twice since an earlier version was leaked to the press around April Fool’s Day; for more on that, see the reactions to that version of the script that were posted last month by ABC News, Slate, the Hollywood Reporter and Jeffrey Wells. Meanwhile, Variety reports that Lionsgate has acquired distribution rights and plans to release the film October 17 — three weeks before election day. Anyone want to guess what effect this movie will have at the polls, if any?

May 8, 2008 Lucas wanted Indy 4 to be more "wacky"
Recent Comments
4 Comments | Leave a Comment
"I certainly hope to! Just haven't had the time to do Season 2 yet."
Peter T Chattaway The Chosen — season one scripture ..."
"Hi Peter.Thanks for this extensive list. Will you be doing the same for all seasons? ..."
Meelperd The Chosen — season one scripture ..."
"I have neither noticed that much. I recenty read a leadership book inspired from Cyrus ..."
Hamid Mortazavi Cyrus the Great — a Persian ..."
""AD" stands for "Anno Domini", a Latin expression meaning "In the Year of Our Lord".So ..."
Peter T Chattaway The Chosen — season one, episode ..."
Browse Our Archives
get the latest updates from
FilmChat
and the Patheos
Entertainment
Channel
Related posts from FilmChat