Hancock — a parable about America? 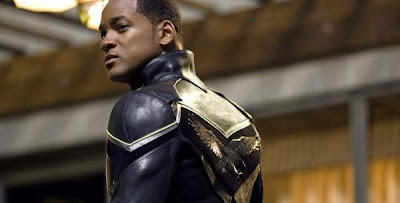 What some intend as parody, others intend as, um, contrarian thinking, or maybe even no-really-I’m-serious analysis.

Three days ago, Will Smith appeared on The Colbert Report to promote his dysfunctional-superhero movie Hancock. (Click here to watch that episode in the States, and here to watch it in Canada.) And somewhere in there, the always-ironic Stephen Colbert asked a question that left the normally chatty Smith speechless:

The superhero who uses his power and people get mad at him — this is not a metaphor for America, is it? This isn’t one of those Hollywood-elite-attacking-America things where America uses its superpower and everybody gets mad at us?

Today, conservative film critic Kyle Smith had this to say about the film:

“Hancock,” directed by Peter Berg, who also made last year’s pro-America Middle East crime drama “The Kingdom,” is superficially a blockbuster aimed at the masses who like to see cars thrown around and wish they could fly, but for those who read into a film it’s a sly allegory about America’s place in the world today. . . .

Hancock is a guy whose symbol is the eagle. He’s the “only one of my kind,” a lone, lonely superpower. He’s unpolished, maybe even swinish. He does the right thing (in Winston Churchill’s words) only eventually. He whales on pissy little Frenchmen named Michel and his name, of course, is in a sense the name of the first American. (When else should his story be told but on the Fourth of July weekend?)

Hancock didn’t ask to be the most powerful force in the world, and after taking a lot of abuse about his methods he is having trouble coping with himself. You might say his personal sense of whether he’s headed in the wrong direction or right direction is at an all time low. He sleeps the days away on benches with a bottle of booze.

When roused to duty he calls to mind Colin Powell’s remark that America didn’t ask to be the world’s policeman–but who else can you call when you need a cop? . . .

The point of Hancock is that though he keeps saving the lives of the citizens of L.A. from the criminals who bedevil them, everybody hates him. He can’t just apprehend a bad guy by reading him a sternly-issued statement; he has to throw the scumbag’s car through a skyscraper. Of collateral damage there is much.

But sometimes Hancock has no choice but to overreact, and sometimes he’s just careless and sloppy about the details, even as he manages to leave things much better than he found them. Hancock’s m.o., in other words, is Berg’s defense of the American war-making apparatus: taking care of business with the world’s supervillains but often creating a mess in the process. . . .

What if Hancock made an effort to be something other than the coarse bully who ignores the advice of others? Witness the Wussification of Hancock. Do we want a hero who submits mewling to censure from authorities (Hancock allows himself to be arrested)? Do we want a Hancock tied up in group therapy that looks as dull and pointless as a UN hearing? . . .

And so on, and so on. Make of all that what you will.

For now, I can spot at least one element that complicates Smith’s thesis: the eagle which adorns Hancock’s uniform, and which Smith sees as a good thing, is put there, as is the uniform itself, by the PR guy who begins the very process of “Wussification” that Smith sees as a bad thing. So it would seem that Berg is either tweaking the use of such patriotic symbols, or — if we must pursue the political analogy — he is not defending America’s recklessness but suggesting that true patriotism reins in a nation’s bad habits. Or, of course, he may be doing both. Yeah, that’s the ticket.

By the way, speaking of The Colbert Report, the first episode I ever watched all the way through aired last week, and it featured interviews with Bishop N.T. Wright, one of my favorite religious historians — I interviewed him a couple of times in the mid-1990s, and have written other stories on him besides — as well as the Cookie Monster. Yes, the Cookie Monster. I loved it. (Click here to watch that episode in the States, and here to watch it in Canada.)

June 27, 2008 We are all robots in need of love.
Recent Comments
3 Comments | Leave a Comment
"I have neither noticed that much. I recenty read a leadership book inspired from Cyrus ..."
Hamid Mortazavi Cyrus the Great — a Persian ..."
""AD" stands for "Anno Domini", a Latin expression meaning "In the Year of Our Lord".So ..."
Peter T Chattaway The Chosen — season one, episode ..."
"Why does it say at the start of episode 3 that it takes place 26 ..."
Desiree Chamberlain The Chosen — season one, episode ..."
"What about Hellboy, The Grudge, Ghoulies, and Anaconda?"
45th Spiderbob Group VGCP When R-rated franchises go PG-13 …
Browse Our Archives
get the latest updates from
FilmChat
and the Patheos
Entertainment
Channel
POPULAR AT PATHEOS Entertainment
1