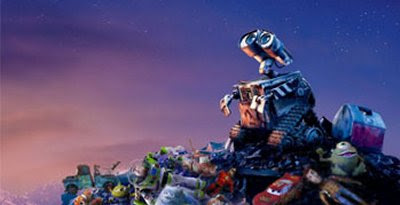 Say what you will about Evan Almighty (2007), but you can’t deny that the filmmakers went out of their way to underscore, and live up to, the movie’s environmental themes. When I went down to Los Angeles for the press junket last year, the studio even made a point of sponsoring trees in the reporters’ names, among other things.

So it is a little strange now to hear that WALL*E and the hype machine surrounding it have been sending out some incredibly confused signals. The film itself seems to be a moral, cautionary tale about a future in which advertising and consumerism have basically ruined the planet and sucked the life out of humanity — but the press junket exhibited these same negative qualities that the film is supposedly satirizing.

I mentioned this in my last post on the film, where I alluded to something a colleague of mine had said after attending the junket. Now Devin Faraci of CHUD.com has written a full-blown editorial asking whether the film is “environmental or hypocritical”:

The truth of the movie’s intentions can only really be known to Stanton. On some level you have to take a filmmaker on his word, even when that word appears to be ludicrous. Still, although he won’t cop to making Wall-E a movie with a wonderful, socially conscious message in mind, he does admit that getting such a message out of his film is a good thing. The question becomes will that message ever actually make it out of the movie and into kid’s heads? . . .

When I got to the Four Seasons hotel the next day, the site of the junket for the film, and saw an entire room dedicated to showing off the marketing tie-ins, I lost the sense of irony and began to think what I was seeing was flat out hypocrisy. I wondered if maybe Stanton’s denials about the messages weren’t coming from a marketing point of view but from simple shame. . . .

I’ve had people on the message boards tell me that this doesn’t matter, that the message is all that matters. But just saying something is pointless – which is actually another theme of the film. The movie ends up with the idea that sometimes you have to make hard decisions, sacrifice comfort and easy living to do the right thing, to make things better. To, quite literally, save the Earth. This is an inspiring message… that is immediately undercut by walking out of a movie theater into a world crammed full of landfill-choking plastic Wall-E crapola. . . .

The truth is that Wall-E feels like a really well-made stop smoking ad starring Joe Camel. . . .

It’s important to keep in mind that none of this has to do with the quality of Wall-E as a movie on its own; my review of the film, which did not send me into space the way it did other onliners, will come as soon as the embargo is lifted. And whether or not Andrew Stanton wants to own up to placing environmental and political messages in a film that includes a robot recreation of a protest riot has nothing to do with whether or not they’re there, but I think everyone seeing the movie this coming weekend will have to admit that these messages exist. And most of those people will have to also admit that they’re good messages, the kind we should be happy are included in a kid’s film. The problem is that these messages – intentional or not – are being undercut by a cynical marketing campaign that will likely have a bigger impact on kids than the movie itself. And worse than that, it’s a marketing and licensing campaign that will help advance us just a little bit towards the environmental devastation shown in the film.

Interestingly, the seemingly disingenuous pattern of putting overt political messages into the film and then denying that they are there — or at least denying that they are intentional — can also be seen in how writer-director Andrew Stanton has dealt with the “stay the course” issue, which I also alluded to in my previous post on this film. From MoviesOnline:

MoviesOnline: If you’re not coming with a political or ecological message, you do have stuff about consumerism and upstairs we have a whole product suite. Is there…?

ANDREW STANTON: I wasn’t trying to be anti anything. I think I was just trying to go “Look, too much of a good thing of anything is a cautionary tale.” Honestly, everything I did was in reverse. It was like I’ve gotta go with trash because I love what it does to my main character and it’s very clear, and then I went backwards from that. I said “Why would there be too much trash?” Well it’d be really easy for me to show we’d bought too much stuff and it’d be really easy to show that without having to have it explained and it’s kind of fun. It’s fun to be satirical like that. You know we all have that sort of Simpsons bent, you know. So I just went with what felt somewhat true. I mean I think we’ve always felt that we have to be sort of disciplined in that area.

MoviesOnline: You do use the phrase “Stay the course” in the movie. That’s a pretty overt political statement.

ANDREW STANTON: It just was such a natural thing to say at the time. I said “Screw it! It’s funny.”

However, Fred Willard, the actor who delivers the line, is pretty clear that there is a political subtext there — though that wasn’t the only thing inspiring his performance:

Flying into space seems like a fool proof plan, right? Nothing could ever go wrong there. “They asked if [I] based him on any political people. I based him more on the pilot of an airplane. We get on an airplane and that very soothing voice, ‘We’ll be taking off very shortly. Flying time is 3 hours and 40 minutes. Get comfortable.’ And then you sit a long time and something’s up. ‘This is your captain speaking. Unfortunately we have a little delay. ‘ And then by the end it’s, ‘I have some bad news. We’re going back to the gate. The flight has been cancelled. We should have you on another plane in no time.’ That night you’re in a cheap motel waiting to fly out the next morning. That’s his idea. Keep a good front, do the best they can. Everyone is doing the best they can but it’s out of everybody’s hand.”

When it is revealed how bad things really got, Willard’s character even says, “Stay the course.” “That’s obviously a salute, an homage, to George W Bush. It was in the script.”

It remains to be seen whether this line — and the context within which it is uttered — will tick off the average moviegoer to the degree that it has ticked off conservative bloggers such as Kyle Smith, who has not yet seen the film but writes:

This kind of crack, lame as it is, also breaks the spell of the movie by hurling you out of the theater and back into reality. Moreover, animated films take so long to put together that the jibe may have been written two or three or four years ago. It doesn’t look like quite such a laugh line these days, when staying the course against hurricane-level opposition actually seems to have changed the game in Iraq.

Interestingly, Wikipedia indicates that Bush used the expression “stay the course” repeatedly between July 2003 and October 2006, when staying the course didn’t seem to be accomplishing very much — but then he stopped using it, only a few months before “the surge” began and started turning things around. So that may or may not make the line seem even more dated.

(Though as my friend thomwade puts it, the fact that Bush would use the phrase only when his policies are failing but not when they are succeeding is “a definite layer of funny.”)

June 24, 2008 Newsbites: Treader! Fugitive! Zohan! Guru! WALL*E! Toy Story 3! Angels! Hamlet 2!
Recent Comments
5 Comments | Leave a Comment
"This was a refreshing read. I'm an average fan of Hellboy but I'm also a ..."
Andrew Mathews Doug Jones on Hellboy and Christianity.
"Great interview! One thing I've wondered since watching Season 1 is why they didn't include ..."
A.J. Cattapan Interview: The Chosen writer-director Dallas Jenkins ..."
"Earth actually does exist in the Dark City universe. Early in the film when John ..."
Edward Clint Dark City and the ambiguous ending.
"I don't always agree with your opinions, but your reviews are never less than interesting ..."
Laura-Lee Rahn The top-grossing Italian movie of 2019: ..."
Browse Our Archives
Follow Us!