Doug Jones on Hellboy and Christianity. 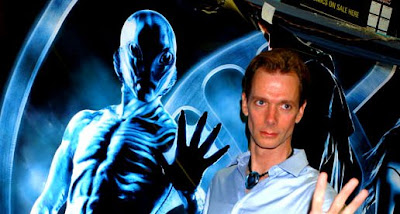 I haven’t got time to say much about Hellboy II: The Golden Army right now, but suffice it to say that it might be my favorite comic-book movie of the year so far.

I mention it now simply so that I can link to this interesting interview that Twitch did with Doug Jones, who plays Abe Sapien and a couple of other characters in the film:

Guillén: When Guillermo and I sat down to talk, we spoke a bit about the Catholic underpinnings prevalent in much of his manifested world. I’m aware that you are also a practicing Christian, are you Catholic?

Jones: I’ve been a lot of denominations over the years but I call myself a generic Christian, yes, and am attending a church now that would remind you of Catholicism. It’s more orthodox. On the first Hellboy, when I was given the script the first day and was told to go home and read it that day and get back to him that night, I’m reading the script called Hellboy and he’s a demon from Hell. I’m thinking, “Okay, I have to respectfully find a way to tell Guillermo I can’t do this movie.” That was my first thought before I cracked open the script. Then I started reading it and realized, “Oh my goodness, I am so not offended by this. In fact, I’m enlivened by it. I’m finding my faith being nurtured and challenged by this story. This is good.”

I loved seeing images in that first movie, where Hellboy had a decision to make. He was being enticed and tempted by the nemesis in that film to regain his princely place in Hell. “Here is the power you can have. Here is what you were meant to be really. And here’s what I can offer you.” That’s when his horns grew back, during this decision, when he was feeling tempted by that offer. Well, that’s when our young agent Myers was watching this, got Hellboy’s attention, and tossed him the rosary that his father Professor “Broom” had given him and that he grew up with as a boy demon. Hellboy caught that rosary in his hand and the image of the cross was burned into his palm. Looking down at his palm is when he realized who he is now and what decisions he had made in the life he’d chosen for himself. That was such beautiful imagery for me. Anyone who comes from the faith that I come from can relate to it and understand.

Guillén: Guillermo excels at expressing the rockbed of faith within even the lapsed Catholic. He pronounces these lines of faith so clearly and—as you said—respectfully in his visual imagery. While filming in Budapest, was your faith heightened by the proximity of orthodox practice?

Jones: Being in Eastern Europe—or Central Europe, as they’re calling it now—has always done that, yes. I love walking around in an old city like that and walking past a cathedral that has so much history. In Budapest, as well as Prague where we filmed the first Hellboy, a dear friend of mine, Brian Steele—who has played a lot of creatures alongside of me over the years; he was Sammael in the first Hellboy and plays Wink and three other creatures in Hellboy II as well—he knew I was a churchgoer and on Easter Sunday while we were shooting the first Hellboy movie he said, “I’d like to go to this Catholic cathedral you’ve been attending for Easter, if I can join you?” I said, “Of course! Come with me.” We walked into this old cathedral, which was absolutely ornate and gorgeous with art work that has been handed down through centuries, and sculptures of Jesus and angels, amazing art work, a building that had so much history to it, and had been active with church services happening almost on a daily basis for hundreds of years, Brian walked in there with me and he said, “Wow!”—we’re whispering in the back of the church because the service had already started—”You can tell a lot of prayers have been answered in this building.” So, yes, that part of Europe is steeped in tradition like that and with history.