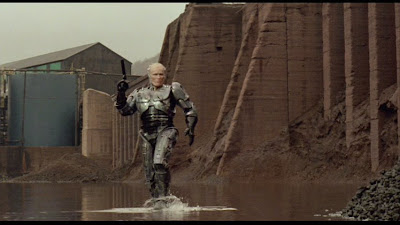 Following yesterday’s official announcement that Darren Aronofsky will direct the “reinvention” of the RoboCop franchise, a couple extra thoughts occurred to me.

For years now, I have taken a perverse pride in being able to say that “I have two X-rated movies in my DVD collection.”

It’s only half-true, technically speaking. Maybe even only a quarter-true.

But one of the films in question is RoboCop (1987; my comments), the director’s cut of which (first released on Criterion, now available along with the theatrical cut on the 20th-anniversary DVD put out by MGM) was rated X before a few seconds of blood and gore were trimmed to get an R rating instead.

And the other film is Requiem for a Dream (2000; my review), which was produced about a decade after the X rating had been retired in favour of the NC-17 rating, and which was released to theatres “unrated” after the MPAA “surrendered” the film’s original NC-17 rating.

The latter film was directed by Darren Aronofsky. So it’s kind of fitting that he would now be directing the “reinvention” of the former film.

The original film was directed by Paul Verhoeven, who has wanted to make a movie about Jesus for years, if not decades, now. Verhoeven even claims that there is Christ imagery in RoboCop itself (the crucifixion-like execution of Murphy, who is shot rather than nailed in the hand; the image of RoboCop “walking on water”; etc.).

And Aronofsky has given a few interviews where he talks about how he really wants to make a movie about Noah.

So they have the ambition-to-make-a-biblical-epic thing in common, too.

July 24, 2008
Newsbites: The sequels and remakes edition!
Next Post

July 25, 2008 Romans drinking and driving, again.
Recent Comments
0 | Leave a Comment
"I have neither noticed that much. I recenty read a leadership book inspired from Cyrus ..."
Hamid Mortazavi Cyrus the Great — a Persian ..."
""AD" stands for "Anno Domini", a Latin expression meaning "In the Year of Our Lord".So ..."
Peter T Chattaway The Chosen — season one, episode ..."
"Why does it say at the start of episode 3 that it takes place 26 ..."
Desiree Chamberlain The Chosen — season one, episode ..."
"What about Hellboy, The Grudge, Ghoulies, and Anaconda?"
45th Spiderbob Group VGCP When R-rated franchises go PG-13 …
Browse Our Archives
get the latest updates from
FilmChat
and the Patheos
Entertainment
Channel
POPULAR AT PATHEOS Entertainment
1