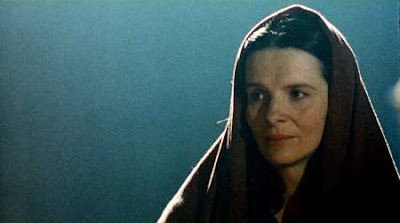 Two weeks ago, I noted that Abel Ferrara’s Mary (2005), which stars Juliette Binoche as an actress who is deeply affected by her performance of Mary Magdalene, was finally coming to New York, years after it premiered in various European countries.

That engagement has come and gone, now, so here are some of the reviews and interviews that have popped up since my previous post.

Most significant is an interview that Ferrara did with FilmMaker magazine, in which he shares his views on the historical Jesus, the Gnostic gospels, and the role of women at the Last Supper, etc. Cinema Echo Chamber has a video interview with Ferrara, as well.

And then there are the reviews, and the sample paragraphs thereof.

As for MARY, the less said, the better. I have no doubt that the prize it won at Venice was an f-you to Mel Gibson. It is not worthy of a prize at the world second-most-prestigious juried festival (and there’s lots of films I don’t like that I realize are aesthetically distinguished and “prize-worthy”. MARY is not. It is lazy, padded, unfocused and just felt unfinished and phoned-in.

Louder and more chaotic than its material seems to warrant, Abel Ferrara’s Mary feels like the condensed version of a much larger movie. It includes scenes from a religious epic, TV interviews, street fights, limo rides, infidelity, hypocrisy, apostasy, and conversion, but at a mere 83 minutes the whole thing’s over before it has even begun.

When Ted questions the human and the spiritual in Jesus on his television show, when Marie leaves her fame as an actress for a life wandering between the Middle East and her “visions,” when Tony Childress fights to get his film viewed without any pre-judgment, locking himself in the projection booth, and, ultimately, when Ted’s dark night life—both work and play—leaves his wife dangerously alone, Mary is brashly asking the same frightful things across simultaneous scenes. Simplistic dramatic arcs are forsaken for utter and complete immediacy; Ferrara, like Samuel Fuller, delivers earnestness with a rare, complete, and often frightening directness. The vitality, the fear and the ecstasy of such a style, of Mary, makes the cinema of Abel Ferrara one of utter necessity.

I have never actually liked Ferrara’s work, but I have also had a difficult time forgetting some of his most memorable images – such as the bad Lieutenant at the feet of Christ, which as a Jungian prefiguration of Gibson’s Jesus is one of the most effective Christ images in modern American cinema. Mary is likewise burdened by Ferrara’s “messiness,” but this time that messiness works with the grain of his characters in a realistic scramble for faith and redemption. Faith is messy, the search for the historical Jesus is messy, and fortunately, so is Ferrara’s film.

Leary also makes this brilliant comment at the Arts & Faith forum: “I completely disagree with the historiography and spirituality of the film, but I really enjoyed the way I disagreed with it.”

Other reviews are archived at Rotten Tomatoes and Metacritic.

See also the scene analysis that Matt Page posted nearly two years ago, when the film came out on DVD in Europe.

October 24, 2008 Walden Media keeping busy without Fox.
Recent Comments
0 | Leave a Comment
Browse Our Archives
get the latest updates from
FilmChat
and the Patheos
Entertainment
Channel
POPULAR AT PATHEOS Entertainment
1