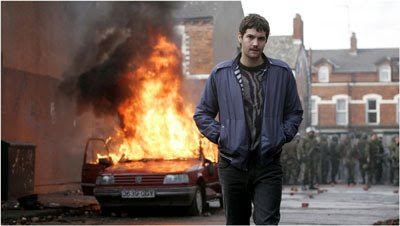 Alas, I pretty much missed the last few days of the Vancouver International Film Festival this week, but I hope to get a few capsule reviews up in the near future anyway. In the meantime, I think it’s worth noting how this year’s festival, perhaps unwittingly, underscored the ongoing question of what, exactly, constitutes a “Canadian” film.

The movie that opened the “Canadian Images” section of the festival two weeks ago was Stone of Destiny, which tells the true story of how a handful of Scots drove down to London in 1950 and stole the titular relic from Westminster Abbey. What is the Canadian connection, you ask? Well, it was produced with a bit of Canadian money, and writer-director Charles Martin Smith — best known perhaps for playing one of The Untouchables (1987), along with Kevin Costner, Sean Connery and Andy Garcia — happens to live and work in Vancouver. But that’s pretty much it. (For what it’s worth, though, one of the characters depicted in the film did move to Vancouver some years later; his widow was at the screening I attended.)

Meanwhile, the film that won the “Western Canada Feature Film Award” last night was Fifty Dead Men Walking, which tells the true story of how a member of the IRA saved a few dozen lives by leaking information to the Brits. What is the Canadian connection, you ask? Well, it was produced with a bit of Canadian money, and writer-director Kari Skogland comes from British Columbia. Even better, a brief prologue shows the former snitch living in hiding somewhere in Canada — but the rest of the movie, told as one giant flashback, still takes place in Belfast.

See the problem? If the purpose of promoting Canadian filmmakers — whether by giving them government grants or by devoting an entire festival series to them — is to help our artists to “tell our stories”, then these particular films wouldn’t quite seem to do the trick. They may be “Canadian” behind the camera, but in front of the camera, they tell basically Scottish or Irish stories instead.

Now, Canada certainly has a strong connection to the British Isles in general, and to its Celtic roots in particular, so it’s not surprising that we would have an affinity for stories like these. And there were certainly lots of other films at this festival which were indisputably Canadian on both sides of the camera. But it still seems a little odd to see these two particular films highlighted in this way.

Oh, how were the films themselves? Okay, but not great, I thought. Stone of Destiny is a bit rote and perfunctory in some ways, and shamelessly Scottish-nationalist to boot; but it tells a story I had never heard before, which has to count for something, and the night of the heist itself is an amusing series of errors and near-misses. Fifty Dead Men Walking is more of a jumble, with its relentlessly brutal depiction of Belfast’s streets, its seemingly indestructible protagonist, and its fitful explication of the political landscape; but it has its moments, too.

October 11, 2008 The end of Walden?
Recent Comments
0 | Leave a Comment
Browse Our Archives
get the latest updates from
FilmChat
and the Patheos
Entertainment
Channel
POPULAR AT PATHEOS Entertainment
1