From “A tale of the Christ” to “Revenge set him free”? 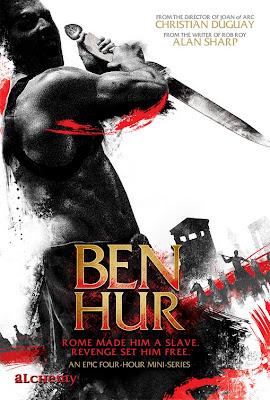 Incidentally, I’m not sure it’s really all that big a deal that this “epic” mini-series will be four hours long. Take out the commercial breaks, and this TV show could easily be shorter than the big-screen Charlton Heston version of this story.

OCT 13 UPDATE: Matt Page has found another poster for the mini-series which calls it “an epic tale of revenge and redemption”, and he wonders what the “source of redemption” will be in this version of the story. Jesus? Or something else?

He also notes that the website for Alchemy, the company producing this mini-series, was down for renovations earlier today — but if you go there now, the story’s logline reads like so:

Based on the classic novel by Lew Wallace, BEN HUR tells the story of a young man whose best friend betrays him, sending him into exile, slavery, and near certain death. Through his skill as a chariot driver, Ben Hur triumphs over his enemies and eventually finds peace through forgiveness.

Peace through forgiveness? Okay, that’s more like it. So what’s with the sword in the poster? Maybe he uses it in the sea battle.

The Alchemy website also says the film will be a “2 x 90′ mini-series”, which would seem to confirm that, without commercials, this mini-series will be three hours long — or about half-an-hour shorter than the film that starred Charlton Heston.

October 14, 2008 An American Carol -- the review's up!
Recent Comments
3 Comments | Leave a Comment
Browse Our Archives
get the latest updates from
FilmChat
and the Patheos
Entertainment
Channel
POPULAR AT PATHEOS Entertainment
1