Kings — the interview’s up! 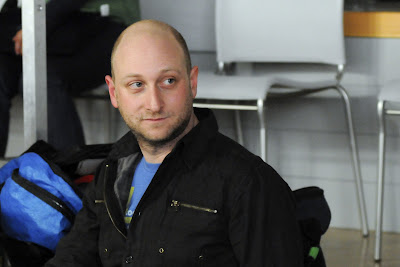 My interview with Michael Green, executive producer of the new TV series Kings, is now up at BC Christian News.

The first episode airs tomorrow night, and it’s interesting on a number of levels, especially if you’re a Bible-movie buff like me. (The show is basically a modernized version of the story of Saul and David.) I’m not reviewing the episode, per se, but here are four extra points that occurred to me while watching it, which I couldn’t fit into the article linked above:

First: The way the film depicts David’s battlefield heroism, and his reluctance to be feted and exploited by the powerful and influential people back home, is reminiscent of Flags of Our Fathers (2006) — but when I mentioned this to Green, he said he had never seen that film, so he couldn’t comment on that.

Second: The way the show conveys the gap between life on the battlefield and life in the big city — the gap between those who risk their lives for their country and those who live in the lap of luxury, especially while running the country — is intriguingly reminiscent of a line from the biblical story of David and Bathsheba, which begins by telling us that “David remained in Jerusalem” when he sent his army out to fight during that time of year “when kings go off to war”. There is an implicit critique of David’s behaviour in that line, just as there is an implicit critique of the modern, real-world ruling class in the TV show.

Third, and a little more spoiler-ish: The reason Reverend Samuels finally withdraws his support from King Silas is strikingly different from the reason the prophet Samuel gave for finally withdrawing his own support from King Saul. Whereas the biblical king failed to be as thorough as he could have been in wiping out an entire ethnic group (i.e. the Amalekites), the TV king violates a peace treaty and keeps a war going after everyone else had thought it was over. (There’s a little more to it than that, but I don’t want to give too much away.) So on one level — and it’s not necessarily the most important level, where either of these stories is concerned, but still, it’s there — you could say the TV king is rejected for being too violent, while the biblical king was rejected for not being violent enough.

Fourth, and even more spoiler-ish: The first episode ends with a twist that almost seems to be taking aspects of the biblical David’s story — aspects that come up long, long after Saul is dead — and transposing them onto this earlier part of the storyline, and onto entirely different characters. I am thinking specifically of how the biblical David faced a rebellion led by his son Absalom and his grandfather-in-law Ahithophel; a similar conspiracy involving one of Silas’s offspring and one of Silas’s in-laws seems to be in the works here, too.

Future episodes could prove me wrong, though!

March 10, 2009
Newsbites: The sci-fi and fantasy edition!
Next Post