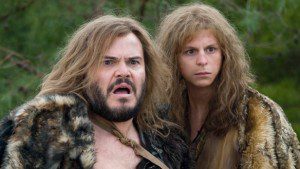 It had to happen eventually. It has been five years since The Passion of the Christ brought the Bible epic back to the big screen, and nearly four since Judd Apatow began producing and directing a string of raunchy comedies — a few of which, such as the musical pseudo-biopic Walk Hard, have dabbled explicitly in genre parody. It was only a matter of time before Apatow or someone like him turned their attention to the religious epic, and the result is Year One, a buddy comedy that takes a relentlessly lowbrow look at the Book of Genesis.

Written and directed by Harold Ramis, who had small roles in Walk Hard and Knocked Up but may be best known as the director of Caddyshack and Groundhog Day, the new film takes at least some of its ideas from non-biblical sources, too. The story centers on two men who are expelled from a village of prehistoric hunter-gatherers, and if the film as a whole is tapping into a trend that began with The Passion, then the opening scenes bring another Mel Gibson movie, Apocalypto, to mind, as one of those men takes part in a wild boar hunt.

Alas, the man in question, Zed (Jack Black), is a tad clumsy and has a habit of spearing his fellow villagers rather than the animal that they are pursuing — but this is not what gets him expelled from the village. Instead, he breaks “the rules” when he goes to the Tree of Knowledge and eats some of its forbidden fruit, hoping the fruit will make him smarter. For this and other transgressions, Zed is sent into exile, and he is joined by his reluctant best friend Oh (Michael Cera), a shy, timid gatherer who talks to the berries he picks.

Thus begins their journey into the early chapters of Genesis. Two of the first people Zed and Oh meet are Cain (David Cross) and his brother Abel (Paul Rudd), and the ensuing conversation annoys Cain so much that he kills Abel right then and there. Feeling guilty — though that doesn’t stop him from pounding a rock into his brother’s face whenever Abel stirs — Cain runs away from home and takes Zed and Oh with him. One thing leads to another and they all end up in Sodom, but not before Zed and Oh have had a chance to meet Abraham (Hank Azaria, who seems to be riffing on George C. Scott’s Abraham from The Bible: In the Beginning…) and his son Isaac (Christopher Mintz-Plasse).

Along the way, people talk about God every now and then, but his role in the story is rather diminished; indeed, where the Bible ascribes certain actions to God, the film consistently ascribes them to regular people (except for one lightning bolt, the timing of which may point to a higher cause). It is not God but Zed’s fellow villagers who expel him for eating the forbidden fruit; it is not God but Adam (Ramis) whose questions prompt Cain to complain that he isn’t Abel’s “keeper”; and it is not God who saves Isaac from being sacrificed at the last minute but Zed and Oh, who stumble onto the scene just as Abraham is raising his knife.

In addition, the biblical characters we meet are typically made to look rather arrogant, loony or both. Cain may be a murderer, but Abel seems a bit smug when he talks about being God’s favorite; Adam casually invites one of his guests to “lay” with his daughter, and his son Seth (Gabriel Sunday) is inordinately fond of sheep; and while an embarrassed Abraham does back down from sacrificing Isaac, he later announces that God has told him to cut off a piece of every man’s penis, including those of his guests — but don’t worry, he’ll serve refreshments afterwards. Zed and Oh take this as their cue to go far, far away.

On a certain level, comedies like these can serve a valid purpose, inasmuch as they highlight the vast gulf in sensibilities between ancient cultures and our own; it is not a bad thing to realize just how “strange” the ancient world was, or how “strange” we would seem to them. But Year One isn’t really interested in making us re-evaluate our own modern prejudices and expectations; plus, it loses much of the texture of the original stories, for example by turning Abraham into an unthinking zealot rather than a man who was quite capable of negotiating with God, as he did for example over the fate of Sodom and Gomorrah (Genesis 18).

A recurring theme in this film is the ineffectuality of rules and traditions, and the need for individuals to strike out on their own. Eating the forbidden fruit might not literally make Zed a smarter man, but he does become more curious and adventurous afterwards, almost as a placebo effect. And when Zed and Oh arrive in Sodom, where the pagan king (Xander Berkeley) and his high priest (Oliver Platt) are imploring the gods to relieve them from a drought, much is made of the notion that anyone who enters the temple’s holy of holies will automatically be struck dead — but this, too, proves to be an easy rule to break.

By the time Zed gives a speech telling people that they can make their own destiny, free of religious authority, it is clear that Ramis was trying to put a bit of a message into his film, not unlike the message that came through in Monty Python’s Life of Brian. But the Pythons remembered to keep things funny even when they were speechifying, and their humor was, even at its naughtiest, of a wittier and more intelligent variety. Far too often, Year One is content to wallow in smutty humor or in cringe-inducing gross-out scenes for their own sake (people urinating in their own mouths, tasting animal dung while hunting, etc.).

The end result is a movie that “takes us back” in all the wrong ways. Occasionally amusing but not very funny, and far too coarse and stupid to be all that enlightening, Year One has to rank as the most disappointing Bible-themed movie by a major studio in decades.

1. Does seeing a movie like this affect how you read the original Bible stories in any way? Does the movie omit important things? If so, what? Does it highlight any aspects of the Bible that you never thought about before?

2. When Abraham says God told him to sacrifice Isaac, Isaac replies, “If the Lord told you to jump off a cliff, would you do it?” How would you respond to this? What would you have done in Abraham’s place if God had given you a similar command?

3. Zed tells the people of Sodom that there is no “chosen one,” adding: “Maybe we can make our own destiny. Maybe we can all be chosen.” Do you agree or disagree? What does it mean to be “chosen”? Is Zed properly acknowledging the one who does the choosing? Why do you think God “chooses” people and nations in the Bible?

4. Zed and Oh argue at one point over whether God exists. Do you think the film ultimately tips in either side’s favor?

Year One is rated PG-13 for crude and sexual content throughout (no nudity, but lots of sexually suggestive language and imagery; also scenes of people urinating on themselves and tasting animal feces, etc.), brief strong language (a few four-letter words) and comic violence (Cain beats Abel to death with a rock, soldiers attack a caravan, etc.).

June 20, 2009 Year One -- the review's up!
Recent Comments
0 | Leave a Comment
Browse Our Archives
get the latest updates from
FilmChat
and the Patheos
Entertainment
Channel
POPULAR AT PATHEOS Entertainment
1 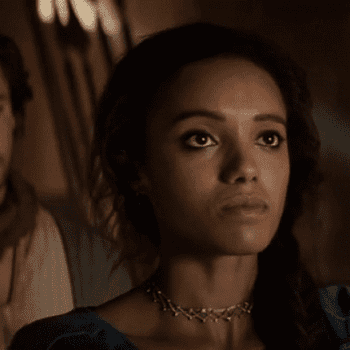