Year One — the review’s up! 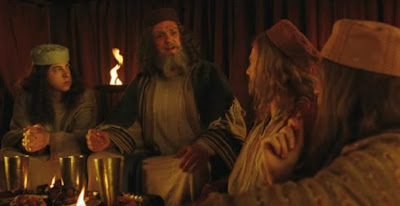 My review of Year One is now up at CT Movies.

I also wrote a post at the CT Movies blog a few days ago listing several other Genesis-themed movies, along with links to any comments I may have made about those films that are currently available online.

Anyway, back to Year One. Here are two points I considered making in my review but, for whatever reason, didn’t:

One, Hank Azaria is a very talented voice actor — he and Harry Shearer play almost every male character on The Simpsons whose last name isn’t Simpson — and I strongly suspect that the growly voice he brings to the part of Abraham may have been inspired by George C. Scott’s performance as Abraham in John Huston’s The Bible: In the Beginning… (1966).

At any rate, while I do quibble with the way the part of Abraham is written in Year One, I thought Azaria’s performance was very good — certainly better than the movie deserves — and I have already begun to drop phrases like “wine and sponge cake” into random conversations as a tribute to him.

And this isn’t the first time Azaria has brightened up an otherwise dull movie, even just in recent memory; last month, as Christian Toto notes, Azaria was one of the best things about Night at the Museum: Battle of the Smithsonian, in which he played the villainous Pharaoh.

Two, unless I’m missing some subtler nuance, it seems to me that Year One plays right into certain old stereotypes about homosexuality: lesbians are hot, indeed very hot, whereas gay men are fat, grotesque, and somewhat predatory.

This may or may not be a point worth making about a film that is so relentlessly crass and juvenile in other ways (writer-director Harold Ramis has said that he made the movie for teenaged boys, such as his 14- and 19-year-old sons), but it will be interesting to see if anyone else picks up on this aspect of the movie or says anything about it.

June 22, 2009 Canadian box-office stats -- June 21
Recent Comments
2 Comments | Leave a Comment
""AD" stands for "Anno Domini", a Latin expression meaning "In the Year of Our Lord".So ..."
Peter T Chattaway The Chosen — season one, episode ..."
"Why does it say at the start of episode 3 that it takes place 26 ..."
Desiree Chamberlain The Chosen — season one, episode ..."
"What about Hellboy, The Grudge, Ghoulies, and Anaconda?"
45th Spiderbob Group VGCP When R-rated franchises go PG-13 …
"Not yet, but I might do something like that once Season 2 is complete."
Peter T Chattaway The Chosen — season one scripture ..."
Browse Our Archives
get the latest updates from
FilmChat
and the Patheos
Entertainment
Channel
POPULAR AT PATHEOS Entertainment
1