Moses gets an action-movie upgrade 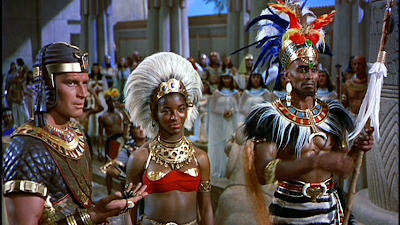 Variety reports that 20th Century Fox is developing a new movie about Moses. While there have been numerous cartoons and TV movies about Moses over the last few decades, this will presumably be the first major live-action version of the story produced for the big screen since Cecil B. DeMille’s second version of The Ten Commandments (1956).

Like every other ancient epic being made these days, the studio plans to pattern this film after Braveheart (1995) and 300 (2006), and that could pose a challenge to the filmmakers, given that most versions of this story have focused on the divinely ordained miracles — the plagues, the parting of the Red Sea, the giving of the Law — and have never really had any hand-to-hand combat.

However, the studio plans to incorporate non-biblical traditions about Moses into the storyline — such as his conquest of Ethiopia, as reported by Josephus, perhaps? — and the Bible does depict Moses and the Israelites getting into skirmishes with the Amalekites and with Og the gigantic king of Bashan, etc., so there is certainly material to work with, there.

In fact, the battle with the Amalekites takes place between the crossing of the Red Sea and the receiving of the Law at Mount Sinai, and I can remember discovering this when I was a kid and being a bit disappointed that DeMille’s film had skipped over that episode. So in principle, I would not only have no objection to a battle scene or two in a life-of-Moses movie, but would actually kind of welcome it. (I’m not so keen on the more genocidal aspects of the Israelites’ military campaign, though, admittedly.)

The script for the new film will be written by Adam Cooper and Bill Collage, who recently wrote a new version of Moby Dick for Timur Bekmambetov, the director of Wanted (2008) and Night Watch (2004); they also wrote the college comedy Accepted (2006).

Hmmm… the story of Moses and teen comedy… now where have I seen these two things juxtaposed before?

October 16, 2009
Did Mel himself come up with that last line?
Next Post

October 23, 2009 Canadian box-office stats -- October 18
Recent Comments
2 Comments | Leave a Comment
Browse Our Archives
get the latest from
FilmChat
Sign up for our newsletter
POPULAR AT PATHEOS Entertainment
1