These are the Spocks I know, I know …

Prior to the J.J. Abrams movie that came out last summer, most of the main Star Trek characters had been played by only one actor apiece. But one glaring exception to this rule was the character of Spock.

Already, in the early 1970s, the adult Spock had gone back in time to visit his younger self in an episode of the animated series; and then, in the 1980s, two of the original movies depicted his birth and the stages of his growth from childhood to young adulthood, using various actors along the way. So when Abrams revisited this territory last summer, he basically just added a new set of faces to the list of people who have played one of Star Trek‘s defining characters.

Since I am a compulsive list-maker, screen-grabber and continuity nut, I figured I would create a gallery of all the various actors (and one possible prop or special effect) that have played Spock over the years, arranged according to the age of the character at the time of the image in question.

And since Leonard Nimoy has played the character at multiple ages himself, I have settled on just a few images of him at key points in the adult Spock’s life and interspersed them below, too. (You might think that all of Nimoy’s pictures would come after the pictures of all the various “young Spocks”, but you’d be wrong: according to the current official Star Trek chronology, the original series pilot ‘The Cage‘ takes place at a time when Spock would have been only 22 years old, and at least two actors have officially portrayed Spock at slightly older ages.)

And so, without further ado, the gallery — followed by a few extra notes and bonus pictures at the end: 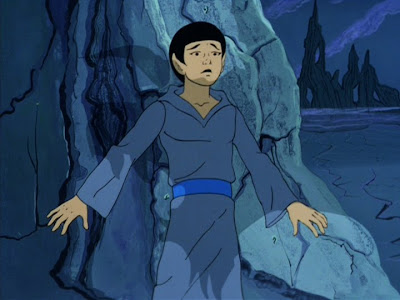 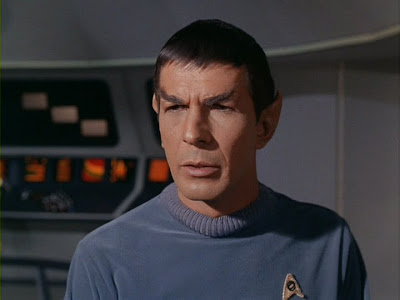 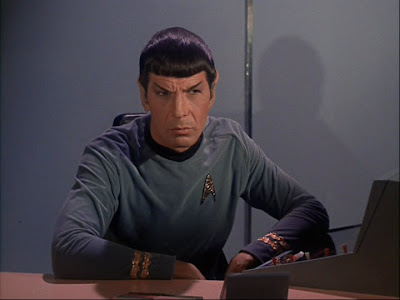 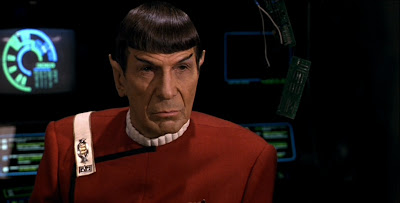 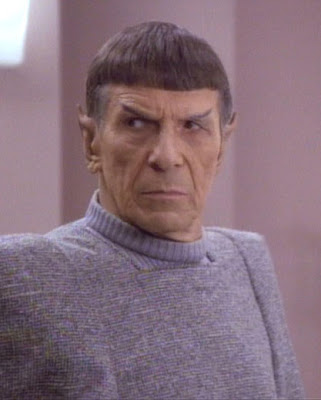 Bonus picture: In the original-series episode ‘The Deadly Years‘, Spock, who would have been about 35 years old, is afflicted by a condition that rapidly ages him to “the high side of 100” and beyond, as Dr. McCoy puts it. This is how the make-up artists imagined an old Spock would look at the time: 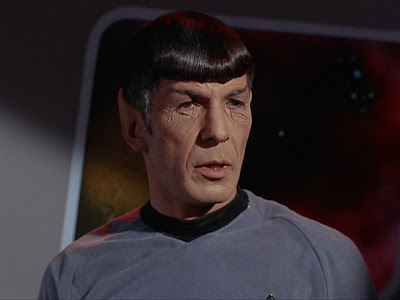 And now for a few footnotes:

First, there is admittedly some ambiguity around the physical age of Spock past his death in Star Trek II: The Wrath of Khan (1982), which took place when he was 53, and his subsequent resurrection in Star Trek III: The Search for Spock (1984). The “Genesis wave” regenerated his cells and accelerated his growth from childhood to adulthood, but it did not necessarily leave him at the exact same age at which he died.

Second, the birth of Spock has been depicted twice so far, but there are reasons to question the canonicity of both versions, quite apart from the fact that the two versions don’t quite match.

In Star Trek V: The Final Frontier (1989), Spock is apparently born in a cave and handed straight to his father Sarek, even though he is still covered in post-natal muck. However, this scene is a telepathic projection created by Spock’s older half-brother Sybok as part of his attempt to brainwash Spock, and one could certainly argue that Sybok gets some of the details wrong.

The birth of Spock — or, rather, what happened immediately afterwards — was also filmed for J.J. Abrams’ Star Trek, and in this case, Spock is apparently born outdoors in broad daylight, and then cleaned and handed to his mother just before Sarek arrives to take a look at the baby. But the scene was deleted from the film itself, so its canonicity is open to question.

Incidentally, I have been unable to confirm whether the baby we see in ST5:TFF was a real baby or just a prop. The behind-the-scenes photo below indicates that it may have been a prop, but it is also possible that the man in the photo is holding a doll that served as a stand-in of sorts for a real baby: 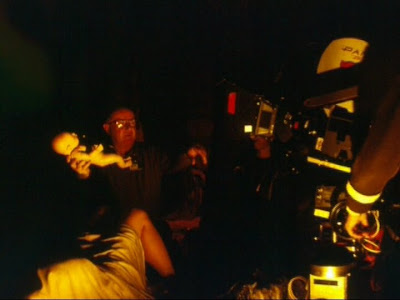 Finally, regarding the ambiguity around the dating of two of the photos:

The photo of Zachary Quinto says Spock is “26 or 28” because it depends on when you date the character’s birth. The relevant scene from the J.J. Abrams movie takes place in 2258, and according to the official Star Trek chronology, Spock was born in 2232 — one year before the birth of Kirk and therefore one year before Nero came back in time and created a brand new alternate timeline. So Spock ought to be 26 in that photo. However, the deleted scene of Spock’s birth from that same movie bears the date 2230, so on the movie’s own terms, Spock would have to be 28. But the scene was deleted, so it isn’t necessarily canon; and just as the special effects weren’t finished yet, perhaps the subtitles, too, could have been tweaked to fit the existing chronology.

Meanwhile, the photo of Leonard Nimoy from Star Trek: The Motion Picture (1979) says Spock is “39 or 41” because the dating of that movie is somewhat vague, and it depends on which of the official chronologies you follow. You can read more about that debate here.

January 3, 2010 Review: Avatar (dir. James Cameron, 2009)
Recent Comments
1 Comment | Leave a Comment
"Whoever wrote this article called Mary a virgin. She was only a virgin till after ..."
Ronnette Harvey The latest attempt to film all ..."
"In addition to this explanation of why "Paul says he can’t tell the Roman Christians ..."
PaulDT Paul, Apostle of Christ: a scene ..."
"Outstanding outline and identification of references and sources as well as background. Thank you so ..."
PaulDT Paul, Apostle of Christ: a scene ..."
"" So now, basically, the Magi are just a substitute for Santa Claus." <- Well... ..."
The 3 Wise Men — not ..."
Browse Our Archives
Follow Us!