James Cameron then and now. 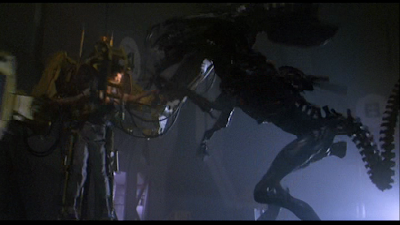 There is a lot that can be said about Avatar, and I hope to say more in the next few weeks, especially after I see the film a second time. But for now, I just want to note a few of the interesting parallels between this and director James Cameron’s earlier films.

In some ways, Avatar simply recycles elements of Cameron’s earlier films without making any significant changes. Take, for example, the scene in which the feisty female scientist played by Sigourney Weaver gets into an argument with the belligerent military types and calls one of them “Ranger Rick“; this echoes a similar moment in The Abyss (1989) where the feisty female scientist played by Mary Elizabeth Mastrontonio gets into an argument with a belligerent miliary type and calls him “Roger Ramjet“. (I asked a friend of mine if there were any other 1960s characters with the initials R.R. that Cameron could cite in any future scenes like this, and he suggested Rocket Robin Hood.)

In other ways, the film recycles elements of Cameron’s earlier films and dumbs them down. Chief among these is his treatment of corporate villains. In Aliens (1986), Paul Reiser played a yuppie who initially comes across as kind of friendly — indeed, he jokes about being “an okay guy” despite the fact that he is with “the company” — but as the movie progresses, we gradually come to see just how cowardly and even murderous he really is. The character has a certain nuance and complexity, and initially there is even almost something kind of appealing about him, such that we are disappointed to learn his true nature. But in Avatar, all we get is Giovanni Ribisi ranting and cackling and generally just being a pain in the neck.

The most interesting thing about Avatar, though, is the way it recycles certain elements of Cameron’s earlier films in order to flip them around and stand them on their head. Three examples of this, ranging somewhere between deeply significant and fairly trivial, come to mind:

First, remember the battle between Ripley and the Alien Queen, which Ripley fought with the help of a load-lifting mechanism that extended her arms and legs, in Aliens? The walking battle machines in Avatar look a lot like those mechanisms, but here, when the mechanized human battles the dark, curved monster, we are supposed to be rooting for the monster and not for the human being.

Second, remember how an Arab terrorist dangled from a missile in True Lies (1994), before Arnold Schwarzenegger, playing an agent of the American government, shot him to his death with the somewhat absurd catchphrase “You’re fired”? Once again, in Avatar, a white American pilots an airborne fighting machine of some sort, and a representative of the “other” — who is engaged in acts of “terror”, according to the American characters — dangles from a missile. But again, we are supposed to be rooting for the “other” and not for the person who is ostensibly on “our” side.

Finally, remember how one of the key themes of Terminator 2: Judgment Day (1991) was the way in which the cyborg — the hybrid “other” created by one kind of being to infiltrate the ranks of another kind of being — became increasingly “humanized” after he was reprogrammed to assist the Connors? Once again, in Avatar, we have a character who is, in some sense, a hybrid of two species that are locked in conflict, and although he primarily identifies with one side, he increasingly comes to identify with the other side; the difference here is that the character starts out as human and increasingly becomes the “other” instead. The Terminator is redeemed by becoming more human, as it were, while Jake Sully is redeemed by becoming less human.

There are many other bits and pieces in Avatar that point back to Cameron’s earlier films in some way, but these are the ones that stood out the most, for me. More later, perhaps.