Toy Story 3 and its place in Pixar’s legacy. 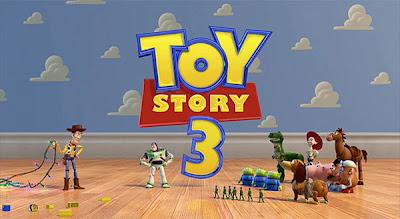 A rough cut of Toy Story 3 was shown at the ShoWest event in Las Vegas yesterday, and the buzz so far is pretty ecstatic — especially with regard to the film’s final 30 minutes, which, as Jeffrey Overstreet has noted, is a nice change of pace from the last few Pixar films, where everyone agreed that the first 30 minutes were really good but opinions varied on the remainder of those stories.

Katey Rich at CinemaBlend.com does have one question, though, about this film and its place in Pixar’s filmography:

The print of the film we saw was not finished, and it’s likely that there will be some tweaks before the June 18 release. But when we get there I think we’ll be having a conversation about the Pixar legacy, about how groundbreaking their work has become in the last few years and whether or not revisiting the movie where it all began was the right step for a company that, at its best, can legitimately be called avant garde. As much as I loved seeing all the toys again, I’m not 100% sure that this adventure– as entertaining and lovely as it was– was the right one for Pixar at this moment. Toy Story 3 takes many big risks, and twists your heart around as much as Wall-E and Up, but at times it felt far safer than what we’ve come to expect from them.

This seems like as good a time as any to dust off a brief note on Pixar’s recent history that I posted at the Arts & Faith discussion board in June of last year, when Up was only a few weeks old:

Peter Suderman has openly wondered if Pixar will ever ditch the kiddie elements and make a movie that targets adults, full stop. I don’t think this is likely to happen, partly because Andrew Stanton has already gone on record to the effect that Pixar films are meant to be “family films”, and therefore any grown-up films developed at Pixar (such as Stanton’s own John Carter of Mars, or Brad Bird’s 1906) will be released by Disney under one of its other labels.

But another reason I don’t think it is likely to happen is because of the upcoming roster listed near the top of this thread: of the four films that Pixar currently has in development, three are sequels to some of their kiddier hits (Toy Story 3, Cars 2, Monsters Inc. 2), and one is being billed as Pixar’s “first fairy tale” (The Bear and the Bow). These films might very well rise above mere kids’ fare, as Pixar’s earliest films did, but they do seem to be starting and staying within that realm (as opposed to some of Pixar’s more recent films, which, as Suderman suggests, have started as grown-up projects and then had kiddie elements “grafted on”).

Thinking about this further, it occurs to me that the last three Pixar films — Ratatouille, WALL-E and Up — were probably all put into production at a time when Pixar had every reason to believe that it would no longer be tied to Disney’s corporate business plan.

The original contract between Disney and Pixar (which gave Disney full ownership of the characters created under that contract) expired with Cars, and there was a famous period of a few years there where Steve Jobs was making a lot of noise about taking Pixar’s future films to some other distributor; in return, Disney created Circle 7, a whole new animation department that existed purely to create sequels to Pixar films, sequels that would presumably have been sub-par and would presumably have competed with the films that Pixar made independently.

It is not too hard to imagine that the folks at Pixar decided to “raise the bar” a little with their independent films, and so Ratatouille, WALL-E (the first story reel of which was created in 2003) and Up (the writing of which began in 2004) aimed higher — though they still kept enough “kiddie elements” so as not to lose their core audience.

But then, in January 2006, only five months before the release of Cars, Disney and Pixar shocked everyone (including, it is said, many people at Pixar itself) by announcing that Disney had not only renewed its contract with Pixar — rather, Disney had actually bought Pixar outright. Yes, one of the terms of the deal was that Steve Jobs took a place on the Disney board of directors, and that John Lasseter took charge of Disney’s homegrown feature animation (thus resulting in “Pixar lite” films like Bolt). But what sort of films did Pixar itself decide to make after that?

Well, for one thing, Disney shut down Circle 7, which had been working on a Toy Story 3 … and then Pixar announced that it was making Toy Story 3 itself. And then Pixar announced it was making Cars 2. And now Pixar has announced it is making Monsters Inc. 2. (And somewhere in there, Pixar has decided to produce its first-ever “fairy tale”.) So Pixar is now doing to its earlier films what Disney would have done with or without Pixar.

We can only imagine what stories Pixar would have told if they had allowed their Disney contract to lapse and had sailed ahead into full-blown independence. But as it stands right now, stories with primarily grown-up themes seem to be taking a back-seat to the kiddie fare.

March 18, 2010 The three phases of Pixar history, redux.
Recent Comments
0 | Leave a Comment
Browse Our Archives
get the latest from
FilmChat
Sign up for our newsletter
POPULAR AT PATHEOS Entertainment
1