Cain and Abel to have a cameo in Aronofsky’s Noah

Cain and Abel to have a cameo in Aronofsky’s Noah July 30, 2012 Peter T. Chattaway 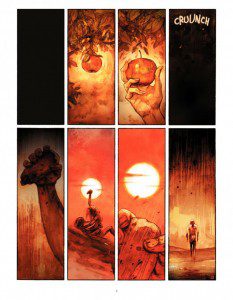 Iceland Review reports that Darren Aronofsky has just cast two Icelandic actors, Jóhannes Haukur Jóhannesson and Arnar Dan, as Cain and Abel in his upcoming movie about Noah and the Ark. Those who know the biblical story will recall that Cain killed Abel and went into exile some time before the birth of their brother Seth, who went on to become one of Noah’s ancestors — so presumably Cain and Abel will appear in a flashback or prologue or something. And indeed, if you check out the graphic novel that Aronofsky co-authored while he was developing his movie, it seems one of the very first pages draws an explicit link between the Fall in the Garden of Eden, when Adam and Eve took the forbidden fruit, and the first murder, committed by one of Adam and Eve’s sons against another.

July 30, 2012
Peter Jackson makes it official: The Hobbit will be a trilogy.
Next Post

July 30, 2012 Movies as urban time capsules, redux.
Recent Comments
3 Comments | Leave a Comment
Browse Our Archives
get the latest from
FilmChat
Sign up for our newsletter
Related posts from FilmChat