Flashback: A look at a few of Tarantino’s older films. 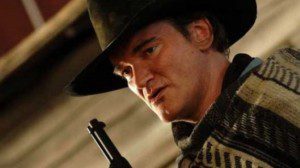 Less than two weeks into its theatrical run, Django Unchained is already well on its way to becoming Quentin Tarantino’s biggest hit ever, at least in North America; it has already outgrossed all but two of his films, and could very well pass Inglourious Basterds, the current champ, by next weekend — especially if it gets a box-office boost when the Oscar nominations are announced this Thursday.

I have not had a chance to review the film myself yet, but I figured this was as good a time as any to re-post the few articles on Tarantino films that I have written over the years. Two — the reviews of Four Rooms (1995) and From Dusk Till Dawn (1996), the latter of which was not directed by Tarantino but was written by him and co-starred him — date back to my student-newspaper days. I also devoted a few paragraphs to Kill Bill (2003-2004) in a Books & Culture article on revenge movies, plus I reviewed Inglourious Basterds (2009) for the now-defunct BC Christian News.

January 3, 2013
An addition to the Left Behind family.
Next Post

January 7, 2013 Brad Pitt to play Pontius Pilate?
Recent Comments
0 | Leave a Comment
"What a strange article. Using movies as your basis to defend that Lazarus was murdered ..."
Mark Ross DeFazio The death, resurrection, and second death ..."
"Another with Ethiopian eunuch and Philip https://archive.org/details..."
Jason McKahan Watch: Philip is the original vanishing ..."
"I found Hanky Panky a pretty cool 80s movie when I first saw it on ..."
UniblabBR Sidney Poitier marathon: Hanky Panky (1982) ..."
"In 1972, yes. The movie was made in 1956 but the ratings system didn't exist ..."
Peter T Chattaway One of the reasons I do ..."
Browse Our Archives
get the latest from
FilmChat
Sign up for our newsletter
POPULAR AT PATHEOS Entertainment
1

The Unholy is Creepy, But Suffers From a...
Christian entertainment blooms this time of year. In the space between Palm...
view all Entertainment blogs
What Are Your Thoughts?leave a comment
Copyright 2008-2021, Patheos. All rights reserved.