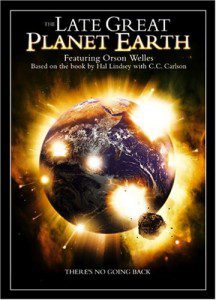 Fred Clark has a post up today in which he notes that the pop-cultural flotsam and jetsam produced by Hal Lindsey, Larry Norman and other end-times enthusiasts back in the 1970s continues to have its fans, even though the dire warnings of imminent doom made by those people never came true. Noting that a Southern Gospel band called The Hoppers recently covered ‘I Wish We’d All Been Ready’ — a song that Norman first recorded way, way back in 1969 — Clark writes:

Shouldn’t the fact that it’s now more than 40 years later cause us to question that message a bit? It reminds me of the book-store customer in about 1994 who wanted to special-order a copy of Hal Lindsey’s The 1980s: Countdown to Armageddon. She was terribly disappointed when I told her it was out of print.

This reminds me of my surprise when, in the early days of DVD, I was flipping through the discs at a local store and discovered that someone had actually re-issued the movie version of The Late Great Planet Earth (1978) in that format. The film, narrated by Orson Welles and based on a best-selling book by Lindsey, makes a number of ominous predictions about the 1980s, none of which came true — and yet, here was the movie, over two decades later, still “in print”, as it were.

Not that I’m complaining, mind. As a student of the past, I’m always glad when some of the seemingly more obscure products of the past (and what could be more obscure than the independent-movie equivalent of a religious tract?) turn out to be relatively easy to find. Heck, you can even watch the film on YouTube, now.

Oh, and about that Hoppers cover of ‘I Wish We’d All Been Ready’? As a friend of mine noted on Facebook, one thing that’s kind of weird about the music video posted by Clark is that the singers actually smile from time to time, which is kind of unnerving for a song that begins with the words “Life was filled with guns and war / And everyone got trampled on the floor…” Norman wrote the song as both a warning and an elegy, but now it’s almost another piece of feel-good nostalgia.

July 12, 2013 Movies that flip their source material on its head
Recent Comments
1 Comment | Leave a Comment
"This was a refreshing read. I'm an average fan of Hellboy but I'm also a ..."
Andrew Mathews Doug Jones on Hellboy and Christianity.
"Great interview! One thing I've wondered since watching Season 1 is why they didn't include ..."
A.J. Cattapan Interview: The Chosen writer-director Dallas Jenkins ..."
"Earth actually does exist in the Dark City universe. Early in the film when John ..."
Edward Clint Dark City and the ambiguous ending.
"I don't always agree with your opinions, but your reviews are never less than interesting ..."
Laura-Lee Rahn The top-grossing Italian movie of 2019: ..."
Browse Our Archives
get the latest from
FilmChat
Sign up for our newsletter
POPULAR AT PATHEOS Entertainment
1