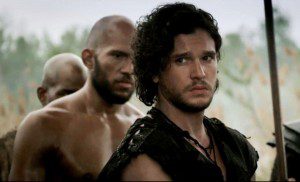 There are several movies coming out this year that are set in ancient Greece or Rome (or, if not in Rome itself, then at least within the Roman empire). Pompeii is the second of those films to get a theatrical release (and the first to get a theatrical release in Canada, since The Legend of Hercules never opened up here), and it’s not too hard to see why the studio wanted to get it out there as soon as possible, before all the other, and presumably better, films come along.

In a nutshell, for all its digitally-enhanced, disaster-movie bombast, Pompeii is a fairly boring, predictable and uninspired little film. Set during the last days of the city that was famously destroyed when Mt Vesuvius erupted in AD 79, the film is directed by Paul W.S. Anderson, who got his start making video-game flicks like Mortal Kombat, Resident Evil and Alien vs Predator — and while no one goes to an Anderson film expecting greatness, you still hope for something that might justify the price of your popcorn: some visceral thrills, some excellent 3D effects, or maybe even some cheesy humour. But Pompeii fails to deliver even on those modest terms.

The storyline and its characters are as simple and generic as they come.

Milo (Kit Harington) is a Celtic gladiator from the British Isles whose family was slaughtered by the Romans, and who now seeks revenge against Corvus (Kiefer Sutherland), the senator who presided over the massacre. Atticus (Adewale Akinnuoye-Agbaje) is a possibly more seasoned gladiator who has been promised his freedom if he survives one more fight. Cassia (Emily Browning) is an aristocratic young woman who has returned to her parents’ home in Pompeii after spending some time in Rome. And Corvus himself is a hissable villain who wants Cassia’s hand in marriage, though the film never bothers to tell us why.

Sutherland, at least, seems to be enjoying himself in a campy sort of way. The other actors? Not so much.

Like a lot of films, this one assumes that gladiators killed each other on a regular basis. My own understanding is that fights to the death were not quite as common as that, partly because there were only so many gladiators to go around and you didn’t want to go through your supply too quickly. (It’s kind of like how boxing movies tend to assume that every fight must end with a knock-out, when in real life many of them are won on points.)

But the deaths presented here are fairly rote and uninteresting. If you’re going to present non-stop carnage in the arena, then the least you could do is make it suitably gory, like Ridley Scott did in Gladiator. But no, unlike most of Anderson’s previous films, Pompeii is rated PG-13 and thus pulls its punches in a big way.

Oh well, at least the film should have some decent visual effects when Mt Vesuvius blows its top and covers Pompeii in a thick layer of ash, right? Well, sure, it does, to a point. But even here, it’s striking how the balls of fire that land on the city seem to stop and start, as though pausing to allow the film to have a dramatic moment or two; and if you’re watching the film in 3D, it’s disappointing to see how it doesn’t really do much with its third dimension, apart from one striking shot in which shafts of light peek through a door. (I say this as one who remembers being impressed by Anderson’s use of 3D in Resident Evil: Afterlife — and I am not generally a fan of that franchise.)

Among the film’s many clichés is its approach to religion. Once again, the African character is the only one who seems to have any sort of active spirituality, praying as he does to the gods or ancestors whose votive figures he keeps in his cell. The other characters — “hero” and “villain” alike — proclaim self-servingly that the earthquakes and volcanic eruptions around them are signs that their gods are taking their side against other people, but they show no interest in spirituality or religion aside from that.

None of that would matter much if the film at least gave us characters who were somewhat interesting. But alas, with the possible exception of Sutherland’s scenery-chewing — if he had a mustache, he’d twirl it — there is little if any charisma between the actors to make up for the fact that their parts are so badly underwritten.

And it’s a shame to see that Anderson’s second major period piece — following The Three Musketeers, which was at least somewhat amusing — is so lifeless, even when people are running in terror from their inevitable deaths.

Oh well, it’s only February. Let’s see how the next few Greco-Roman epics do.

February 19, 2014
The righteousness of Noah: what have the rabbis said?
Next Post

February 22, 2014 Aaron Paul on Joshua and the size of Ridley Scott's Exodus
Recent Comments
0 | Leave a Comment
Browse Our Archives
get the latest from
FilmChat
Sign up for our newsletter
POPULAR AT PATHEOS Entertainment
1