Did A.D. The Bible Continues plagiarize a modern prayer?

Did A.D. The Bible Continues plagiarize a modern prayer? May 1, 2015 Peter T. Chattaway

One of the really interesting things about A.D. The Bible Continues is the way it turns the high priest Caiaphas into a much more complicated character than we usually see in adaptations of the gospels. Among other things, the show emphasizes the character’s devout Jewish faith by having him recite a prayer or two in nearly every episode.

Most of the prayers so far have come from the scriptures. In the episode that aired last Sunday, for example, Caiaphas covers his head in ashes while reciting a passage from Psalm 77. But in another scene, he visits Golgotha, where ten innocent Jews have been crucified, and there he recites a prayer that is much, much more recent.

It turns out the prayer in that scene (which begins “We pray for all who are in pain, and all who cause pain”) is an abbreviated version of ‘A Prayer for Compassion’, which was written by Trisha Arlin, a rabbinic student in New York, and posted to her blog last July — only a few months before last week’s episode of A.D. was filmed.

I have been making note of the scriptures quoted by the characters in A.D. in each of my episode recaps since the show began, so I contacted Arlin to see whether the prayer was hers or came from an earlier tradition. She confirmed that the prayer was hers — and she was surprised to hear that it had been used without her knowledge.

Afterwards she tweeted some messages to the A.D. Twitter account, asking them to stop posting quotes from the prayer without attribution. She also noted that the series had used the prayer “without permission or credit or payment.”

Interestingly, the prayer does fit the context in which the episode used it.

Arlin wrote it while serving as the liturgist-in-residence at the National Havurah Committee Summer Institute in New Hampshire, and she wrote it partly because of the Gaza War raging at that time, and partly to coincide with Tisha B’Av, a day of mourning that commemorates the destruction of the Jerusalem Temple.

In the episode, Caiaphas recites the prayer in response to Roman violence against the Jews, in a scene set just a few decades before the Temple was destroyed.

“It’s all that period in which people lost the ability to be compassionate and empathetic and destroyed themselves,” Arlin told me. “The fact that my prayer was written for Tisha B’Av during a time of war in Israel is not uninteresting. I don’t think it’s an accident that they saw that prayer and it struck a chord. So it’s a compliment that they saw in the prayer what I wrote in it. I just wish they’d paid me!”

A note on Arlin’s blog says the prayers she posts there can be used in religious services and are available under a Creative Commons license, which requires that “anyone using or redistributing the work” must attribute the work to Arlin, indicate if necessary where it has been modified, and make the work available under the same license.

By using the prayer the way it did, the series “violated the two most basic aspects” of the Creative Commons license, said Arlin. “I got no credit and they made money off it, and somebody got paid for writing that who didn’t write it, and somebody got money from NBC, and NBC sold commercials. So it’s totally against the spirit of why I write these and how I share them.”

At this point it is not known how the prayer ended up in the episode, or which of the show’s creative personnel found it. But Arlin, who got an MFA in Film at Columbia University with a concentration on screenwriting, said it doesn’t make any difference.

“One of the things you get taught in film school is doing due diligence,” she said. “If you want to adapt or do anything that comes from another source, rule number one is find the source, make sure you have the rights to it. No matter who brought it in, somebody needed to make note of it as being there and checked it out. 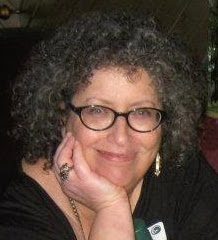 “And if they had asked me to use it and offered me a fair amount,” she added, “I probably would have said yes, because it’s cool!”

Arlin said this is the first time anyone has wanted to use her work outside of a congregation, and while she said she felt “ripped off” because her words were used in a commercial context without her permission, she also said she was “honoured” that someone may have thought her prayer sounded like one of the Psalms.

“I’m very flattered that they used it,” she said. “I think it’s a good prayer too! It’s one that I’m proud of. It’s too bad it was taken without permission and used without attribution or payment, but it’s flattering.”

Arlin has not yet heard from anyone involved with the series.

I also contacted a publicist, who provided the following statement from the show’s production team: “Thank you for bringing this to our attention, the producers of A.D. The Bible Continues have just learned of it and are looking into the situation.”

Last week’s episode of A.D., titled ‘The Wrath’, can be watched on the NBC website in the United States, and on the CTV website in Canada. Caiaphas recites the prayer about six minutes into the episode.

June 19 update: Arlin was contacted by A.D. producer Roma Downey sometime after I wrote this post, but the issue remains unresolved. You can read about that in a story posted by the Jewish newspaper Forward, which also briefly quotes me.

May 1, 2015 Watch: Mary, Gamaliel, and Stephen have things to say in three new clips from A.D. The Bible Continues
Recent Comments
0 | Leave a Comment
Browse Our Archives
get the latest from
FilmChat
Sign up for our newsletter
POPULAR AT PATHEOS Entertainment
1