Adam in Eden, and his glowing spiritual loincloth

A friend just alerted me to the existence of Genesis, a 3D movie full of dinosaurs and other prehistoric animals that is apparently being produced by Ken Ham and other young-earth creationists. (The film has a website and a Facebook page.)

I haven’t really got time to say anything about this film, but I did watch the trailer, and one detail jumped out at me: the trailer seems to include a shot of Adam petting a dinosaur, and Adam’s bum appears to be obscured by a bright light:

This is hilarious, for at least two reasons.

First, you might recall that people like Brian Mattson raised a big stink over the fact that Darren Aronofsky’s Noah depicted Adam and Eve as luminescent beings: 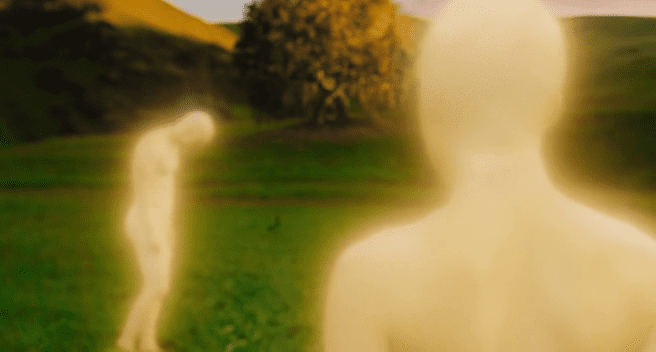 Despite the fact that there are ancient Jewish and Christian traditions which say that Adam and Eve wore “garments of light” before the Fall, some of the people who slammed Noah for its supposed lack of biblical “accuracy” took issue with its depiction of this tradition, calling it a sign of the film’s Gnostic subversiveness etc.

And yet, now, the makers of Genesis — who are promoting their own film as a “literal” and “accurate” interpretation of the Bible — are obscuring Adam’s nudity with a similar glowing effect. The only difference is that it’s only Adam’s nether regions that glow, rather than his whole body! Is there nothing subversive about this?

Second, this partial glow reminds me of how Muslim works of art sometimes obscure the faces of Mohammed and other prophets behind shining discs of light.

I first noticed this convention when I found two different versions of Abraham, the Friend of God on YouTube — the original version produced in predominantly Shi’ite Iran, where dramatic depictions of the prophets are perfectly okay, and another version (which is no longer online) that superimposed bright white circles on the faces of Abraham and Ishmael, who are regarded as prophets within Islam and thus, within the Sunni tradition at least, are not supposed to be depicted directly.

The funny thing is, both Aronofsky’s film and the Sunni tradition associate brightness with holiness, whereas I don’t believe Genesis is trying to suggest that there was anything particularly holy about Adam’s private parts, or that they were holier than the rest of his body. The brightness surrounding his bum exists only to shield our eyes — even if it does unintentionally draw our eyes to that part of the screen, too.

You can watch the entire trailer below:

October 24, 2015
Listen: Podcast interview with the distributor of Risen
Next Post