Watch: George Clooney stars in a Bible movie (sort of) in the trailer for the Coen brothers’ new film Hail, Caesar!

The trailer for the new Coen brothers movie is here, and it seems that the film — titled Hail, Caesar! — may have a Bible-movie hook.

The film itself is a satire set in Golden Age Hollywood, and it features George Clooney as a movie star who is still wearing his costume — dressed as an ancient Roman soldier — when he is kidnapped by a mysterious group called The Future.

Of course, in Golden Age Hollywood, if you were dressed as an ancient Roman soldier, it usually meant that you were appearing in a Bible movie — and that certainly seems to be the case here, in the movie that Clooney’s character is starring in.

Note, in particular, the scene where Clooney’s character looks up at a man on a cross and flubs the line: “…a truth we could see if we had but faith!” 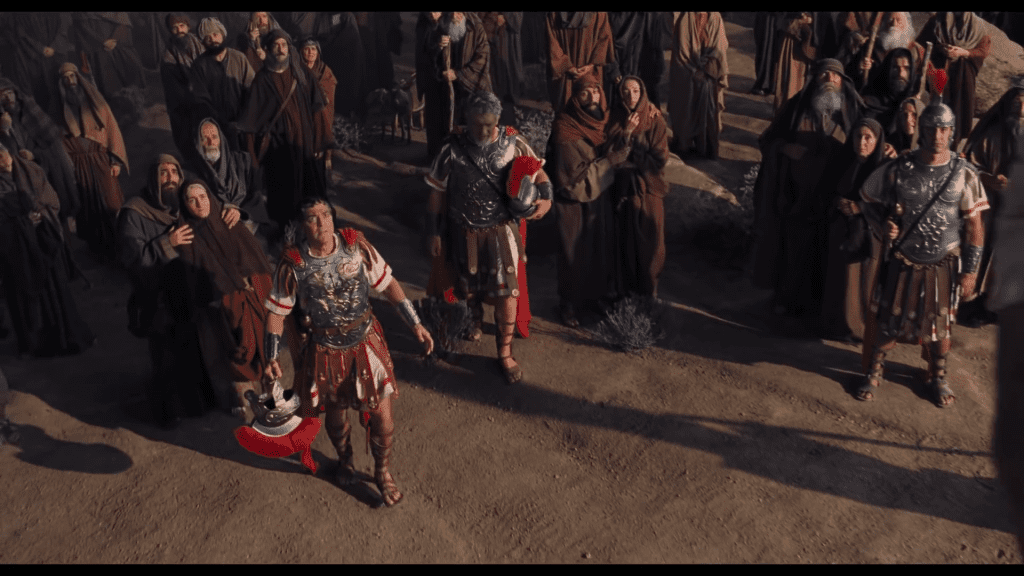 Compare the image above to scenes like this one from 1953’s The Robe:

The biblical nature of Hail, Caesar!’s movie-within-a-movie was apparently confirmed last year by Jeffrey Wells, who read the script and said that “Hail Caesar! is actually the title of a Biblical-era film-within-the-film, seemingly based on Quo Vadis.”

But that isn’t the only movie within the Coen brothers’ movie. As you can see from the trailer, the Coens are clearly riffing on other genres as well, such as musicals and cowboy pictures. So it’s anyone’s guess how big or small a role the religious element will play — but Ethan Coen did say this to Anne Thompson back in 2013:

So, make of that what you will. Hail, Caesar! opens February 5, right in the middle of a wave of Roman-era Bible epics — two weeks after Risen, three weeks before the remake of Ben-Hur, and five weeks before The Young Messiah.

You can watch the trailer for Hail, Caesar! here:

October 6, 2015
War Room is now the top-grossing evangelical movie ever
Next Post

October 12, 2015 A new, "accurate" Noah movie will apparently consist almost entirely of scenes that aren't in the Bible
Recent Comments
0 | Leave a Comment
Browse Our Archives
get the latest from
FilmChat
Sign up for our newsletter
POPULAR AT PATHEOS Entertainment
1