By now you’ve probably heard (if you haven’t witnessed it for yourself) that the new Star Wars movie is basically a start-to-finish recycling of all the main story beats from the original 1977 film. You may have also heard some people compare the new film to Indiana Jones and the Kingdom of the Crystal Skull, which marked the last time Harrison Ford reprised one of his iconic characters after a long hiatus.

There is one other film, however, that The Force Awakens reminded me of, and I was surprised to realize how much they had in common. I refer to Tron Legacy.

Needless to say, there will be LOTS OF SPOILERS here for both films.

So let’s give ourselves a little extra space before I get to those spoilers.

Still with me? Okay, then.

Kylo Ren is basically the Clu figure here. Clu was a creation of Kevin Flynn’s who turned against Flynn and assimilated Tron (though for a while we were led to believe that he had actually killed Tron). Clu also committed an act of genocide against all the spontaneous electronic lifeforms that Flynn had discovered (except for the one who escaped, natch). Flynn reacted by disappearing for decades — not only from our own world, but from the world ruled by Clu. (Flynn was still in the digital world; he just lived in hiding somewhere on the outskirts, far away from the part of that world that was ruled by Clu.) Eventually Flynn’s biological son enters that world and the story starts, and it ends with Flynn sacrificing his life to defeat Clu… and somewhere along the way, we discover that Tron had actually been converted into a villain but is now a good guy again, so there is a hint that we will see Tron again in the sequel.

The Flynn figure in The Force Awakens is divided between Luke and Han — or, rather, the Flynn and Tron figures are shared in different ways by Luke and Han. Kylo, like Clu, is a next-generation figure, and, again like Clu, he has turned against his mentor (Luke) and killed all of his mentor’s wards (Jedi trainees, instead of the spontaneous electronic lifeforms) and driven his mentor into hiding (both Luke and Han leave Leia and the Republic/Resistance). Luke, in particular, does the Flynn thing of retreating to a place far away on the outskirts of the community that he is abandoning, and there he remains until the very end of the movie, where it is hinted that he will finally come back as a character in his own right in the sequel, just like Tron. Meanwhile, new characters — Finn and Rey — enter this world and the story starts, and eventually Han sacrifices his life to stop his son, just as Flynn sacrificed his life to stop his creation Clu. The movie ends with Han’s Wookiee partner flying off with Rey (who I’m guessing is the one trainee that survived Kylo Ren’s genocide, or something like that), just as Tron Legacy ended with Flynn’s son riding a motorcycle off into the sunset (figuratively speaking) with the Olivia Wilde character.

So, those are the parallels I noticed. Have I missed anything? 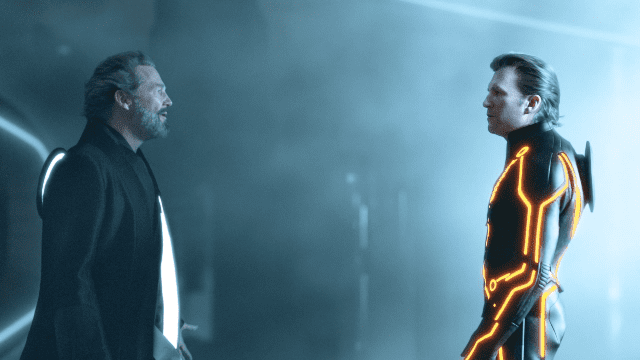 December 18, 2015
Video round-up: New ads for Gods of Egypt and Hail Caesar! New interviews about The Bible and The Young Messiah!
Next Post