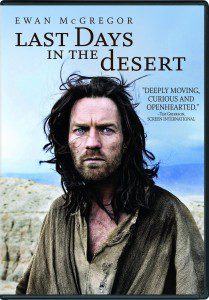 Last Days in the Desert, starring Ewan McGregor as both Jesus and the Devil, is coming to home video next week. If you want to see the film in high definition — and if you want to see the complete uncensored version that played at Sundance last year — then it looks like you’ll have to get the iTunes package, which has both the PG-13 version of the film (which has been playing in theatres for the past two months) and a ‘Full Length Director’s Cut’, all for $14.99. Meanwhile, you can pre-order the DVD, which will apparently have just the PG-13 version of the film, at Amazon for $12.99. The film will be available in both formats August 2.

July 28, 2016 Watch: Uhura faces off against Krall in two new Star Trek Beyond clips, plus a bunch of new TV spots
Recent Comments
0 | Leave a Comment
"Outstanding outline and identification of references and sources as well as background. Thank you so ..."
PaulDT Paul, Apostle of Christ: a scene ..."
"" So now, basically, the Magi are just a substitute for Santa Claus." <- Well... ..."
The 3 Wise Men — not ..."
"Young Chris Kydd is not looking forward to the father and son kayaking trip with ..."
Rafting Tara Billy Graham movies — the ’80s
"Apparently a billion or so people have already figured out the big plot twist to ..."
Buzz Dixon Watch: Trailers for Messiah and The ..."
Browse Our Archives
Follow Us!