A Kenyan film about the suicide of Judas Iscariot

The Nairobian has a fascinating article on a new movie about Jesus, Judas and Mary Magdalene that was produced in Kenya and had its premiere there last month.

The film, called Get Some Money, tells the story of Judas Iscarioti Mikwanja, who lives in Ghetto Semane (Gethsemane, right?) and betrays a leader named Ticha (which I assume means “Teacher”, i.e. the Jesus figure) in order to get money with which to impress a woman he has been seeing named Magda (i.e. Mary Magdalene).

So, like Cecil B. DeMille’s The King of Kings (1927), this film imagines that Judas and Mary Magdalene had a relationship — but it apparently goes even further, by portraying the relationship as a driving force in Judas’s decision to betray Jesus.

This is how producer Winnie Njoki describes the film:

Worth noting, apart from the fact that it is an introspective film that explores our society’s obsession with money and love, according to [producer Winnie] Njoki, it also seeks to bring to light the plight of suicidal beings in an effort to advocate for world bodies to increase awareness and speak against suicide.

“I do not want to give away too much of the film’s story. It revolves around Judas, who is of marrying age, is under pressure from his family to marry, and leaves the discipleship of an order led by a renegade called Ticha (Stitchy Stitch). Judas’ parents, however, will not allow him to marry the woman of his dreams, Magda (Naomi Mburu) as she is Galilayan, a rival tribe, but Judas will hear none of it.

Being the discipleship’s treasurer, he soon begins embezzling their collective funds and spending to impress Magda, who hasn’t the slightest feelings for Judas.

This forces Judas to consult his close confidant Petero (L Biko Nyongesa), who advises him to sell out Ticha.

Interestingly, despite the filmmakers’ focus on serious issues like suicide awareness, the film is described by one of them as “comical”, and it is based on a short film — also called Get Some Money — that was described by one critic as “sort of a parody”.

This is not the first Bible movie to be made in Africa, of course. Earlier examples include the Egyptian Al-Mohager (aka The Emigrant, dir. Youssef Chahine, 1994), the Malian La Genèse (aka Genesis, dir. Cheick Oumar Sissoko, 1999) and the South African Son of Man and Unogumbe (dir. Mark Dornford-May, 2006 & 2013).

Feel free to let me know about other such films in the comments below.

You can watch a trailer for Get Some Money here:

March 5, 2017
Box office: The Shack has one of the biggest openings ever for a "faith-based" film
Next Post 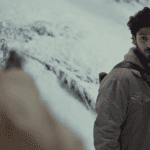 March 9, 2017 Exclusive: The Shack co-star Aviv Alush on being the first Israeli actor to play Jesus in an English-language movie
Recent Comments
0 | Leave a Comment
"Animation would uniquely allow the creator to show the genitalia without getting into the waters ..."
Kellen The naked Christ in film: birth, ..."
"Gentlepersons:While I am a lifelong Christ-follower and served as Chaplain to a graduate program in ..."
Darrell A. Harris Exclusive: Patrick and Paul Aiello on ..."
"I know this is from 5 years ago, but I just got around to seeing ..."
digital bookworm Exclusive: Watch the trailer for Becoming ..."
"Thanks so much for making this list. I was thinking of doing something similar, but ..."
Bill Kudrle The Chosen — season one scripture ..."
Browse Our Archives
Related posts from FilmChat