Here are a few quick Bible-movie-ish news stories to start your week.

1. RoboCop and Showgirls director Paul Verhoeven has been talking about making a life-of-Jesus movie for decades. The subject came up again last week when he promoted his newest movie, Benedetta, at the Cannes film festival. Per Variety:

You wrote a book, “Jesus of Nazareth” and you were a member of the Jesus Seminar, a group of scholars who look at the history surrounding Jesus. Are you religious?

No. I didn’t write my book as a believer. I’m highly interested in Jesus, who was extremely important for our culture and the development of humanism. I studied him and read an enormous amount of books about him.

Do you think Jesus existed?

Of course, Jesus lived. There is so much evidence of it that denying that he ever lived is ridiculous. . . .

Do you have other films in the works?

I’m developing a couple of projects. One is an American movie — a spy thriller that’s going to be set in Washington. I’m also going to make a movie based on my book about Jesus.

In the meantime, Jesus imagery is apparently creeping into Verhoeven’s existing films, in predictably sensationalistic ways. Early reports indicate that Benedetta, which concerns a couple of 19th-century French lesbian nuns, features “explicit dreams about Jesus Christ” and “the most badass Jesus to ever grace the big screen”.

2. The long-gestating film version of Paulo Coelho’s The Alchemist is set to start shooting in Morocco in September. For a few years, Laurence Fishburne was going to direct the film and/or co-star as Melchizedek, a figure who also appears in the book of Genesis. But now the film is going to be directed by Kevin Frakes, a producer of dozens of films (John Wick, Hereditary, etc.) who will now be making his directorial debut.

The lead role of Santiago, an Andalusian shepherd who goes on a quest for life-changing treasure, will be played by Sebastian de Souza. Other cast members include Shohreh Aghdashloo (who I interviewed when she played John the Baptist’s mother Elizabeth in The Nativity Story), Tom Hollander, Jordi Molla, Youssef Kerkour and Ashraf Barhom, though the press release does not say which characters they are playing.

3. Lux Vide CEO Luca Bernabei has given a couple of interviews in which he talks about his company’s plans for The Rising, a new TV series about Jesus. Per Cynopsis:

Take for example The Rising, a series we’re producing about the life and times of Jesus. The series taps into the nuanced political turmoil that existed in the period, and viewers will see the real characters that surrounded Jesus and how their infighting, political intrigue, and gamesmanship ultimately shaped his fate. However, The Rising’s storyline will also embrace the ways of Jesus – forgiveness, working together, love your enemy. Subjects that mark a return to our roots and the type of topics today’s viewers seek.

TV DRAMA: How did The Rising come about?

BERNABEI: We are making something mainly for non-believers. We don’t want to shock believers, but we want to [appeal to] non-believers—people who may have heard about Jesus but don’t know much about him. We want to find a young audience. This is one of our main targets. Jesus says love each other, forgive one another; these words are so lost in this era. Help each other, give food to the hungry. Try to find the positive in each other. Love your enemy—how can you love your enemy? That seems impossible. These are important messages, especially in the world as it is today. We need to get back to our roots, which are so important.

This is how The Rising started, and Stephen found a wonderful screenwriter, Daniel Knauf, who brings a different point of view. It will never be a European vision or an American vision; it will be a joint venture between these two worlds, always coming together to make this new kind of television.

DAVIS: Irrespective of where you are geographically or what your religious beliefs are, there is a really interesting story to tell about Jesus, Mary, Joseph and the Apostles and those individuals around them, and our series is really focused on the humanistic side of their lives. We don’t look at this as a religious retelling by any means. This is an opportunity to show the personalities, the characters and the humanistic experiences of Jesus and those around him in a way that hasn’t been shown in previous films and television series. What’s been phenomenal is the talent we have been able to bring to bear. In addition to showrunner Daniel Knauf, we have an amazing consultant, don Fabrizio Ficco, who is the foremost expert on Jesus and his life. We have other scholars providing the critical and accurate Jewish perspective. It is equally important that this draw heavily from a non-believer’s perspective while being respectful to believers and telling a story that has never been told before. What I love, and this is Luca’s expression, is that Jesus was the original superhero. If you think about it, he is the model for the archetype of every superhero that has come after. If non-believers and believers alike see Jesus in a different light and feel good about their impressions, then we’ve done our job as storytellers and producers.

4. I’m always up for an anecdote on the making of The Prince of Egypt. Here’s one that came up in Cartoon Brew’s interview with Ronnie Del Carmen, who was a story artist on the animated Moses movie before he worked his way up to co-directing Inside Out:

I used the art department location to stage the sequence: a gallery of giant statues of the Egyptian gods sitting in a row. I placed Rameses up there on the lap of one of the gods. I was remembering my childhood in the Philippines when my younger brother Rick and I would sneak out of the house after lunch. Soon we both hear our mom yell our names out loud. She’s on to us and we’re in trouble. But she does not look up to see us in the tree. We were getting away with something!

I imagined this story for Rameses and Moses as kids hiding from Seti and the priests. When Moses enters the palace as an adult, no one in the royal court can find Rameses. But Moses knows where he is. He enters the gallery and starts to talk to the giant statues. Rameses is sitting up there. When Rameses needs to get away from responsibility, he sits up there on the lap of the gods. That was where they both hid as kids. They reconnect as brothers.

When I showed this to Brenda [Chapman and the other] directors, they were so excited. I told them where the idea came from. Brenda complimented me and I felt that I had crossed a threshold. After that day, I started to understand what the job was. I wasn’t there to draw. It’s true that in this visual medium, drawing was a way of telling a story — but the story has to ring true to an audience to begin with. It has to come from you.

Del Carmen came up with this sequence after an earlier pitch — for a sequence in which Moses pleaded with Rameses in an attempt to avoid the ten plagues — “bombed”.

— The photo above is of Paul Verhoeven, from one of the RoboCop DVDs.

June 18, 2021
New TV shows about Esther and Jesus in the works
Next Post 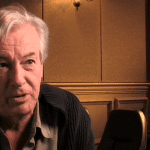 July 12, 2021
Recent Comments
0 | Leave a Comment
""AD" stands for "Anno Domini", a Latin expression meaning "In the Year of Our Lord".So ..."
Peter T Chattaway The Chosen — season one, episode ..."
"Why does it say at the start of episode 3 that it takes place 26 ..."
Desiree Chamberlain The Chosen — season one, episode ..."
"What about Hellboy, The Grudge, Ghoulies, and Anaconda?"
45th Spiderbob Group VGCP When R-rated franchises go PG-13 …
"Not yet, but I might do something like that once Season 2 is complete."
Peter T Chattaway The Chosen — season one scripture ..."
Browse Our Archives
get the latest from
FilmChat
Sign up for our newsletter
POPULAR AT PATHEOS Entertainment
1