Possums, I have a resentment.

Last week, the admin of a local Pagan Facebook group had a colossal meltdown, posting a long rant about what she perceived as a lack of participation and accommodation.

“We as elders are accountable & required to share our knowledge if it is to be passed down,” she wrote. “Why are you here, Elders/Teachers in this community??? The purpose of this group is to build community, help those seeking knowledge… I am disgusted when I see people come here seeking & they get NO response.”

Her timing was a bit off, considering we were in the middle of a historic winter storm that caused statewide electrical and water outages. So, y’know, there were slightly more pressing matters to contend with, hon. At the same time, I did understand her exasperation, and I was almost even on her side, until I read the next few sentences of her diatribe.

“I remember what it was like trying to find my way in this community, how cliquish it was. Seems to still be that way… Really glad so many of you are safe & secure in your unshared group of friends, in your vast knowledge of different paths & private gatherings. What about the seekers?”

Passive aggression and shame-based management notwithstanding…

This is where the resentment kicked in.

A little over a decade ago, at a (now defunct) occult shop, I participated in a psychic fair as part of a fundraiser for a (now also defunct) Houston-area Pagan non-profit. Basically, I did geomantic readings for eight hours straight, which was mentally exhausting, but I raised some money for a good cause, which was gravy. Anyway, things wrapped up, and I was hanging out and catching up with the manager of the shop, when, from across the room, Admin pointed at me and yelled, “Hey, who’s he?”

I started to introduce myself, but she didn’t give me the chance. “I don’t know you,” she said. Then, to the manager, “I don’t know him. He’s…”

And I swear I’m not making this up.

“I’m sure you know [Thumper],” the manager replied, ignoring the “one of us” comment but shooting me a wide-eyed WTF? look that could’ve shattered glass. “He’s on all the Yahoo! groups.”

[Ed. Note: Yahoo! Groups were what we had before social media. You’re welcome, Gen Z.]

Admin paused for a second, scrutinizing me. “Oh, wait, I do know you!”

“You’re one of those troublemakers.”

And with that pronouncement, she turned away and went back to holding court with less worrisome Pagans, while I tried my best not to burst out laughing, and the manager grinned and gave me another look that read, high five, bro.

At the time, I thought the whole thing was hilarious.

Not one of us. As if I was going to be all, “Blast! You’ve found me out!” before whipping off my trench coat and flinging Chick Publications tracts around the room like shurikens. But looking back on the encounter, especially in light of Admin’s new demands for solidarity, I found myself getting angry.

Is that how she treated everyone she didn’t recognize? How many newcomers had run-ins with her and never came back? How many seekers decided to stick with solitary practice, because they were labeled as interlopers when they tried to integrate with the greater community? I’d just spent a day volunteering to help a resource stay on its feet: how was her donation — which amounted to kicking back in a lawn chair and aiming a spotlight at inferiors — worth more than mine?

But if I’m being honest…

One of the main goals of 12-Step Recovery is to learn how to let go of resentments, and one of the ways we do that is by identifying our part in them: What am I doing to contribute to a given resentment? What do I believe about a particular situation that allows the resentment to continue affecting me? Okay, so Admin was rude to me. Fine. What’s my part in that? Did I derive a certain amount of enjoyment from getting called out as a “troublemaker”? Yeah, I did. I got a kick out of being told I didn’t fit in.

Because I didn’t really want to fit in to begin with.

It’s kind of painful to admit, but back in the day, I got a sick sense of self-worth out of seeing myself as just a little better than the general Pagans around me: better educated; better at ritual; a better overall witch who only felt good about himself when he compared himself to others and found them lacking. But that was ten years ago. I have grown a lot since then. And all I’m doing is stunting my own growth if I assume that Admin hasn’t changed in ten years either.

In response to Admin’s harangue, a number of group members posted introductions. I have yet to do so, mainly because I want to have something to say other than, “I’m not even a blip on your radar, but you were once un-neighborly to me, and I’ve decided I’m still butt-hurt about it.” And if I never post an intro, that’s fine too. I mean, I’m an initiate of two Traditions and president of a leather club — I am not hurting for community.

But I do need to keep growing. And I need to remember that as highly as I may think of myself, the locals are not hurting without me. 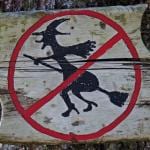