Scribble Me This: Perspectives on Making Sigils

Back in May, Laura Tempest Zakroff tweeted something that legitimately made me laugh out loud:

Saw a dude exclaiming somewhere to someone else “you can’t make a sigil from symbols!” – Dude WTF do you think letters and numbers are?

Granted, Austin Osman Spare’s method of sigil-crafting is fairly synonymous with Chaos Magic, but sigils themselves have always been around, and they were in occult use millennia before Chaos Magic bounded onto the scene. And Spare’s method may work well for some people (including me), but it’s kind of hilarious that anyone would think it’s the only way to create sigils.

And it’s even more hysterical to think that any Chaote worth their salt would look at someone else’s indisputably fruitful practice and go, “Nooooo, you’re doing it wrong.”

In a Facebook group that I normally don’t pay much attention to, someone once posted about Tempest’s book Sigil Witchery, and everyone else was like, “Ugh, finally, a convenient and effortless way to create sigils!” And I got more than a little apoplectic about that, for a couple of reasons.

First of all — and I’m being judgy here, and I own this — I hate the thought of self-described Witches sitting around and twiddling their thumbs while waiting for someone to spoon-feed them “easy” magic. And because I’m so action-driven when it comes to metaphysics, it makes me crazy when people turn up their noses at a particular approach, or write something off as too clumsy or cumbersome or whatever, instead of figuring out a way to make it work for themselves.

But also, the material Tempest presents is not easy: It’s a journey that encourages the reader to tap into their own creative abilities, and that involves trials and errors and starting over and pushing through blockages. It is not paint-by-numbers. And summing it up as an “easy” method does a huge disservice to the author, as well as to any readers thinking they’re getting into some kind of twitch-your-nose-and-change-the-world wish-craft, As Seen On TV.

So let’s move forward with the understanding that there’s more than one way to create effective sigils, and with the knowledge that a) they’re all going to take some effort, but b) we can each find the system that works for us individually, without having to poo-poo any others.

At its core, a sigil is a symbol of a desired outcome, but we don’t necessarily have to write out that desire in order to get results. We can 100% draw it instead.

Pictorial sigils are sympathetic in nature. The Witch or Magician sketches out a depiction of what they want to see happen, and then that image is broken down and consolidated into a simple, abstract motif — one that represents their goal just as emphatically as a sigil created with letters would. It’s a very “As Above, So Below” kind of working, and it lends itself to a lot of expressiveness and originality.

And please note that you don’t have to be a talented artist to pull this off: A stick-figure drawing would honestly make a more practical template for a pictorial sigil than a fine-art portrait, because the design elements would be a lot more straightforward and pliable.

As a disclaimer, I personally have not had a lot of success with pictorial sigils, but I’ve also already got a method that works for me, so I’m not too worried about it. If Spare’s system hasn’t done much for you in the past, give pictorial sigils a try and see what results you arrive at.

One of the first occult books I ever bought was The Magick of Chant-O-Matics by Raymond Buckland. It’s as campy as the title suggests, and very much a product of its time, but it did get me in the habit of actively stating my intentions out loud when doing spellwork. Verbal sigils are not a far leap away from this concept.

To create verbal sigils, we can start with Spare’s method, but instead of combining letters into a singular glyph, we’ll rearrange them to create a short chant or mantra. For instance, if we take the letters from one of the captions above, we can produce any number of sigils:

You can work a verbal sigil into a ritual however you see fit, or do something completely unorthodox with it, like, say, shout it into oncoming traffic. Although — and I’m shooting from the hip here — perhaps don’t actually come up with a verbal sigil to generate blood for the God of the Night. I feel like that would end badly. Just my two pentacles.

Comic book legend Grant Morrison originally coined the term “hypersigil” in reference to his series The Invisibles, the plotline of which was charged to bring about changes in Morrison’s reality. As the story evolved and developed, so did Morrison. A hypersigil works on the same principles as a regular sigil, in that it’s a symbolic representation of a desire. However, the difference between the two is that a hypersigil is “fourth-dimensional”; instead of being a static image, it has a narrative quality that propels it through time. It’s kind of like writing fanfic about yourself.

Morrison explains it a lot better than I can. In Book of Lies: The Disinformation Guide to Magick and the Occult, they write:

The hypersigil can take the form of a poem, a story, a song, a dance, or any other extended artistic activity you wish to try. This is a newly developed technology so the parameters remain to be explored. … The hypersigil is a dynamic miniature model of the magician’s universe, a hologram, microcosm or ‘voodoo doll’ which can be manipulated in real time to produce changes in the macrocosmic environment of ‘real’ life.

Speaking of comics, Promethea is a good example of hypersigils at work. In those books, whenever someone writes a poem or a story about Promethea, she appears in the real world to fight evil. There’s a lot more to the story than just that, of course, but the gist is that Promethea is summoned by creative endeavors, which can serve as a bit of inspiration as we explore the concept of hypersigils ourselves.

And actually, now that I think about it, a blog could almost certainly be used as a hypersigil.

Like, instead of writing about Chaos Magic, I could blog about how I graduated from Starr King School for the Ministry with a Masters of Divinity, and how much I love my new job as a Unitarian airport chaplain, which gives me plenty of time to publish yet another in my award-winning series of books on Discordian Witchcraft. And every time someone reads, likes, or shares one of my posts, the hypersigil would grow in power and move a few squares closer to manifestation.

You know, I should… really maybe invest in this.

In addition to Tempest’s fabulous tome, there’s an ebook called Sigil Magic – Common Forms and Variations by Lars Helvete that delves into a variety of groovy sigilization techniques, and Aidan Wachter’s Weaving Fate is an amazing, hands-on introduction to hypersigils. And there are a ton of other resources out there regarding sigils, so with some digging, you are all but guaranteed to find a system that works perfectly for you.

And hey, if you don’t, you can always do what Spare did and invent your own. And in fifty years, maybe some hardcore Chaos dude will be swearing to his friends that the method you devised is the only way to make sigils. 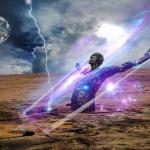 July 26, 2021
Ground and Out: Bouncing Back from Ritual Hangovers
Next Post

One response to “Scribble Me This: Perspectives on Making Sigils”